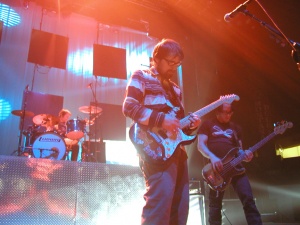 On May 1, 2002 Weezer performed in Billings, MT at the Metrapark Arena on the Dusty West Tour in support of Maladroit. The opening acts were AM Radio and Pete Yorn.


...well for some odd reason, the Metrapark Arena had a policy of having seats on the floor, right up to the barricade. This of course made it a lot harder for fans to go nuts, as they couldnt form any sort of 'mush' pit. Which i suppose was handy from a safety viewpoint, but I got the sense that the kids were a bit stifled by the situation and would have preferred some wild crowd surfing action. They did make up for it by being really LOUD however. A solid show for all three bands. Nothing really crazy happened backstage today.

What a rockin show! AM radio and Pete Yorn both played good sets and got the crowd rowdy, but nothing coulda prepared us for the Weez! Weezer played a great show with songs from every album, including El Scorcho! Only In Dreams was just as awesome as everyone said it was with the confetti and fog and all. The guys seemed to be enjoying themselves, especially Pat and Scott. Scott threw a guitar pick at Pat, and it soon escalated into the throwing of water bottles back and forth between songs. What would otherwise have been a routine rock-band encore was made awesome with the unveiling of the huge =W= from above the stage. The crowd totally freaked at the sight. Buddy Holly was awesome. At the end of the encore, Rivers, Scott and Pat (on Brian's guitar) did an experiment with feedback, which included Pat sprawled on his back in the middle of the stage.... ---Paul

WOW! All i can say is thanx WEEZER for coming to billings and giving a ROCKIN' show! I think my voice is going to be gone tomorrow because i was belting out the lyrics to every song at the top of my lungs.... along with everyone else in the arena!! And i probably lost about 10 pounds from movin' to the grooves. Finally a kewl band comes to billings and shows us the time of our lives. And Pete Yorn and AM Radio also rocked. I would also like to thank Rivers Cuomo for saying "**** THE CHAIRS!" This is an issue that seriously needs to be addressed around here. What kind of venue makes you stay at your seat at rock show. Soooooo...... "**** THE CHAIRS!" YEAH! ROCK ON! ---j.b.

I am from Montana and we do not get a whole lot of concerts with exceptions being a few country singers and the occasional classic rock band. I have been a =w= fan for a while and I was incredibly delighted to hear that they were coming to Billings. My friends and I all counted down the days until the show starting about a month and a half ago. Finally, the show came. I had not heard any of AM Radio's songs before the concert, but they really kicked ass. They were way better than I expected. I was not a huge Pete Yorn fan before the show, but he kicked so much ass that I think I am going to go out and buy his cd. Finally, Weezer came. They opened with Dope Nose and it sounded awesome! Every song they played that night sounded incredible. I was kind of expecting kind of a half ass job because nobody takes MT seriously, but they really rocked. I was very pleasently surprised at how many Pinkerton and Blue songs they played. I didn't keep a real good count, but I think that they played more Blue and Pinkerton than they did Green and Maladroit, and I definetly wasn't expecting that. They crowd went nuts when they did a cover of that one "Happy Forever" song. They ended the night with "Buddy Holly" and some crazy thing that they did with their amps and guitars. It left the entire crowd confused, but they went crazy cheering anyways. I really hope that the band decides to come again. ---Dan