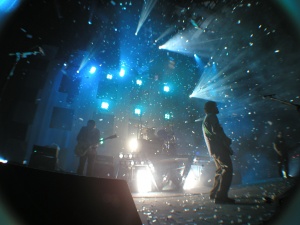 On May 7, 2002 Weezer performed in Witchita, KS at the Kansas Coliseum on the Dusty West Tour in support of Maladroit. The opening acts were AM Radio and Pete Yorn.


...Tornado Warning! Wow, we thought we had had a taste of tornado alley in Nebraska, but here in Kansas things got positively wild! While we were fortunate enough to avoid any 'touchdowns' at Kansas Coliseum, we did experience rediculous winds, huge (by our wimpy standards) hail, and some punishing thunderstorms, which both drenched some poor kids who came out back after the show looking for autographs, and knocked out power to some of the building while they were loading the trucks. Brian grabbed his trusty umbrella and did some "monsoon autographs", while the backup generators kicked in, giving some of the building light. Fortunately all the really crazy stuff happened after the guys had left the stage, so the show was not affected.
The crowd here in Kansas was suprisingly a bit lighter than the rest of the tour so far, but they more than made up for it in their sheer volume and energy. Theres nothing like a few thousand crazed weezer fans all spazzing out at once!

...hey karl, just got back from the coliseum and weezer really put on a show! It was nuts on the floor and it was the best when they played the old favorites from blue and pinkerton. Pat was hilarious at the end when he tried to return the shoes thrown on stage, and Pete Yorn was really good to get us started. Hope you guys made it out before the hail came down! ---G. Palko

...HI! i just got back from the show in Wichita, and it was so totally awesome! i saw them in Kansas City in November, and this time was so much better! i think rivers wasnt as intimidated, because the crowd wasnt as big, and he talked to us alot more. Rivers, you are such a wonderous musican. i love weezer's music with my heart and soul. i got to meet brian, the guitarist. and it was the second time! i met him in KC too. and i also got to see karl. he came out to see the fans, and me and this other girl were the only ones to recognize him. karl, you do awesome work on this site. kudo's to you my friend. i would like to say, that i am a true fan, for i stood outside and got pelted with hail, and drenched with rain, just to meet the band. (typical kansas weather). I would like everyone to know that every weezer concert i've ever been to, has been totally rockin!! you guys are the best! i have never been so happy, but when i see rivers and brian and pat and scott? on stage performing. WEEZER ROCKS!!!... ---??

...The trip started around 1pm. Estimated trip time was 3 hours, it took us 2. We scoped out the place and even saw a big brown tour bus pulling into the arena. I took a picture just incase it was actually Weezer. We spent an hour looking for anything resembling a mall or a Walmart so we could blow some extra time. Finally, we found the so called mall. It had nothing mallish inside of it and coincidentally was attached to a Walmart. The show was totally awesome. As always the weez rocked the house. AM Radio was pretty good. We thought Pete was alright, but he kind of calmed down the crowd after AM Radio was done. The moshing was really fun. We were right in front of Rivers all but the last four songs, and probably never more than 8 people back. I was so happy that they played El Scorcho. All of the songs were awesome. We thought what Pat did with the shoes was awesome. Didn't know he was so knowledgeable about Adidas shoes. We thought Scott was super friendly also. Weezer definitely rocked Wichita. ---Ash and Rob

...Hey, just got back from the Wichita show and it kicked serious ass! I couldn't have hardly picked a better setlist myself. This was my 4th Weezer show and they just get better every time! Modern Dukes sounded really good tonight too with its new lyrics. I couldn't help but laugh when they came out for the encore and rivers had random shoes that people through on stage and he tried to find their owners..."and this is a new style adidas, you can tell by the stripes being farther up...i think its that guys right there..."-Rivers. Of course when he tried to hit the sound guy with a shoe was classic. All in all, great shoe....seeya next time you guys are around kansas/missouri. ---Jarrod T