From Weezerpedia
(Redirected from 2002-05-10 - Albuquerque, NM)
Jump to: navigation, search 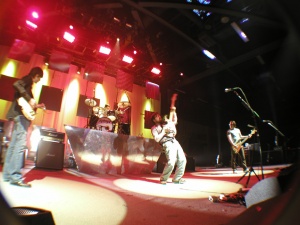 On May 10, 2002 Weezer performed in Albuquerque, NM at the Albuquerque Convention Center on the Dusty West Tour in support of Maladroit. The opening acts were AM Radio and Pete Yorn.

...The Tingley Arena is basically a massive convention center, and I mean massive! Skateboards, scooters and even a golf cart were employed just to get from the dressing rooms to the catering area to the stage. This was the first weezer show here since the fall of 2000. About 3500 weez fans poured into the hall, and they were more than ready to rock. Maybe it was the acoustics of the room, but when the lights went down and they roared, i think it was the loudest of the tour. They were very stoked on both AM Radio and Pete Yorn. They were just plain stoked in general! This was the last show with Pete Yorn, so we had to bid the man and his band a grateful goodbye. Pete's whole touring group was really nice to tour with. Everyone was very professional, talented, and cool, and their hard work is definitely paying off. 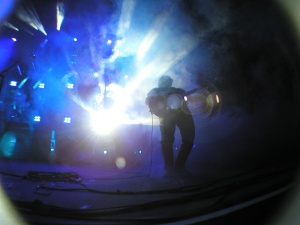 ...Say it Ain't So! There was no Say it Ain't So or My Name is Jonas! My two favorite songs...oh well...it was still the coolest concert i have ever or could ever hope to go to. AM Radio rocked, pete yorn was boring. The setlist was changed a lot, they played more maladroit stuff (Death and Destruction, Fall Together, Take Control). Buddy Holly was in the middle of the set which was very strange to those of us who've been watching the setlists everynigh. Oh yeah and no hash pipe either. I saw Karl filming some video so im assuming we'll be getting a new video clip soon. Weezer should never again neglect albuquerque! ---Brian J

...Just got back from the albuquerque show.. hands down the best concert i have ever been to.. AM radio was awesome, even though i was squished throughout the whole set, but it was totally worth it. My friends and I moved before Pete Yorn, who was pretty good, i don't really understand why Weezer picked him to tour with them, but he put on a good show. Weezer was GREAT, i saw them last time they came to albuquerque, and this time was definitely better by far. Great stage set up and everything was perfect. After the concert we went back to the car which my dad had parked in the back by the tour busses and as we were walking to the car, we ran into Scott Shriner and talked to him for a while and got autographs and all that great stuff. Best night of my life and i will definitely never forget it. ---Karen

...WOW! I have been a longtime huge fan of weezer but I had sadly never been to a show until last night. It was amazing! We got there about three hours beforehand and got a nice tan while waiting in the bright beautiful new mexico sun. It was also my first arena concert and I will never forget the feeling of screaming and jumping and going crazy with thousands of other people while my gods are on stage. am radio also fantastic and the singer was really nice when we met him later. Congratulations to everyone on an absolutely amazing awesome concert; it will definitely not be my last =w= show! ---Mariam