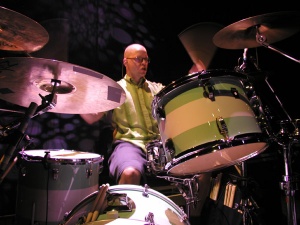 On July 6, 2002 Weezer performed in Salt Lake City, UT at the E Center on the Enlightenment Tour in support of Maladroit. The opening acts on the main stage were Sparta and Dashboard Confessional. Loudermilk, Home Town Hero and AM Radio performed on the side stage located at Club Xscape.

...Okay, here we go! The kids poured into the E Center and were totally psyched. Weezer did a Midget Tour date at this very same place last fall, and while the quantity of concert goers was about the same, the sheer stoke factor present was really impressive tonight. Perhaps its the summer heat, perhaps its the excitement generated by the new "almost anything goes" setlists and the all-new stage setup, but whatever it was, the whole place was on its feet and screaming more often than not...All in all a fantastic start to the Enlightenment Tour.

When Weezer played the E Center in the fall, the band was met with the most impressive bum-rush of reserved ticket holders to the general admission arena floor in recent memory. On Saturday, security personnel were treated to a repeat performance on the opening night of Weezer's "Maladroit" tour, except the throngs were jumping barricades early and often for opening act Dashboard Confessional. The sensitive south Florida rockers led by singer-guitarist Chris Carraba proved worth the effort and potential ejection, turning West Valley City's cavernous hockey arena into just another intimate campfire-style singalong on the trail that's taken Dashboard Confessional from dinky all-ages clubs to an arena tour in barely a year. "For those of you who haven't been to one of our shows, here are the rules," Carraba announced after opening with "Saints and Sailors." "If you know the words, sing along. If you don't know the words, make some up and sing along anyway." Playing songs primarily from their "The Places You Have Come To Fear The Most" album, Carraba and his band made the most of their 40-minute slot. Songs such as "The Good Fight," "Again I Go Unnoticed" and current MTV hit "Screaming Infidelities" were obvious fan favorites, and managed to make listeners forget the size of the room.

Weezer's headlining set, while entertaining and genuinely rocking, somehow lacked the spark of the band's last visit. Maybe it was because this was the first night of the tour, or maybe frontman Rivers Cuomo was just in a strange mood, but there was a bizarre air of self-flagellation as Weezer made its way through songs spanning its four albums. Typically nonverbal between songs, Cuomo kept making references to being a "sell-out" -- his suit-and-tie and the flashy, pyro-heavy stage show might have been part of the shtick. At one point, for no apparent reason, he simply uttered "Phil Collins." Through the exploding flash pots and bizarre banter, though, it's easy to see why Weezer remains a favorite for the power-pop kids. Songs such as "Hash Pipe" and the unreleased "Modern Dudes" -- easily one of the show's high points -- all pack a metallic wallop, while songs such as "Island In The Sun" and "Buddy Holly" provide shimmering, sugary harmonies without the crunch. And Cuomo had some singalongs of his own with songs such as "O Girlfriend" and "Glorious Day."

...I just arrived back from the show in SLC and all I have to say is Wow. Everything was perfect. By far the best live performance I have ever seen in my life. Sparta was awesome. I'd only heard a bit of their stuff, but they really rocked out. Their lead singer came down and talked to some of us at the front of GA after Dashboard's set too. He was a really cool guy.Dashboard was great. Chris is awesome and they weren't too rowdy, which helped with energy levels. They left a few songs out of their set though(one of which I caught). They need Best Deceptions & The sharp hint of new tears. I dug what they played though. Then the big Weez. I'd first like to say that I like Scott's new hair. I like the fact that Rivers was shaved, was wearing a suit, and sunglasses. He was hip. The set list was awesome. Keep the Pinkerton coming. Modern Dukes sounded awesome. Also, Pats "Elevated" experience was awesome. Say It Aint so as the encore was awesome, especially because of the chant the crowd had going on. Awesome show, and the Enlightenment tour is going to rock the universe... ---Bert

...Well, sweet lord was that a good show. Sparta and Dashboard were awesome, and I must say, that all of the "waiting" music was sweet. . .i was waiting for a little Van Halen, but alas, there was none. When I saw Pat, Brian, and Scott walk out . . it was divine, but then Rivers sauntering out . . .(it was almost a mosey) with a suit! Man alive, it was good moment in my life, and the shades . . . what can i say, they're all babes. Such pearls from heaven, like surfwax america, el scorcho, glorious day, modern dukes, slave, why bother, across the sea, buddy holly, island in the sun, and some more that i can't remember because the crowd-surfing idiots. I've never heard of buddy holly reffered to as "meat and potatoes", but hey, i'm not the one who wrote the song! there were a plethora of lovely comments made by the man in the suit all night long. . .it was great. "Obey you master" and "I've got you right where i want you" were great or the "intro" to island that was "put two feet on the floor for this one" . . .but the best was the madonna one that left his lips. the pryo work was divine, and there's a new layout for the =w= . . . all of the shredding and feedback after "say it ain't so" was just more than i could handle for one night! the only thing that sucked were the t-shirts. what in the hell were you guys on when you approved to designs for those . . honestly . . .i could do a better job for free . . . it's alright because i just got the weerez one online is instances such as these. Everyone put out tonight, and at the teck kiosk (as i like to call it) Karl was videotaping and there was this sweet skateboard that i just wanted to take . . .but i didn't. I guess that's the utah mormon in me shining through (as it rarely does)!... ---natalie