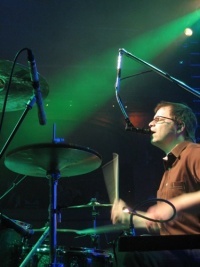 On May 12, 2005 Weezer performed in New York, NY at the Roseland Ballroom on their tour in support of Make Believe. The opening act was Ringside.

Second night of the big NYC doubleheader. We left the hotel in a cloud of celebrity action, seeing both James Brown (uhnh!) and Trey Anastasio from Phish in the lobby at one point or another during our stay. Off to Roseland again. The line went completely around the block by the time they started letting the people in today, and included many fans who had tickets to both nights. (supposed to shout out here, but once again too much info in brain! was it... Nick and ... A...?) They wanted some big suprises tonight, but I had to warn them that there would probably be only a few changes to the set list, which ended up being true. Also, I learned that at last nights show, contrary to my observations, there was indeed a fight, during "We Are All On Drugs" - but fortunately it didnt come to fisticuffs. Gotta be careful about those fisticuffs. And there were more fainting episodes than originally thought yesterday as well. Its a big room, cant be everywhere at once I guess!

Anyway, the rock was delivered with what seemed like a greater intensity today. There was something about the sound out in the audience that was crisper to me as well. It really sounded pretty amazing actually. This may have been the better night overall. However, it was also more intense for the audience, with lots of shoving and squashing. This time I did see the EMT guys assisting numerous 'mosh pit' people who were overcome and needed a break to get their breath and senses back. The audience was a good deal more aggro and louder than yesterday, and indeed, were rivalling the most raucous crowds of the tour with their raw raunchy raucousness and singalongs.

Tonight the special guests included Ric Ocasek and Paulina P., Adrian Tomine (Optic Nerve), Pete C. (Weezerisland), DaFlavah, and Wherewas, who unfortunately had a scare when his friend was hurt by an overzealous worker dude who shoved the barracade out a wee bit prematurely and whacked her foot. Things were made right in the end, but thats just lame. Hopefully there will be a lesson learned to cool out a bit and not treat the fans like cattle once the lights go up.

Putting a crimp in many fans travel back home after the show was the sudden collapse of a huge retaining wall on the West Side Highway near the GW Bridge! Traffic in both directions was hopelessly snarled as people had to re route around one of the busiest highways in the country. yikes.

I went to both shows at Roseland and I have to say that the second night beat the first. Rivers' apology for not playing El Scorcho seemed very sincere, and the crowd seemed to understand. Rivers talked more than usual tonight too. Kind of like he did during the enlightment tour. He felt comfortable for the New York people I guess. I like how the band was a lot more comfortable on stage this time around. Also, Ringside got a great response tonight, and performed wonderfully. The small setlist changes were excellent for people who went both nights, switching Pardon Me with This Is Such A Pity and switching the encore to Haunt You Everyday and Hashpipe. They brought back the 10 minute feedback improv!!! I loved it. The intro to "Buddy Holly" reminded me of the enlightment Tour. It was great to see them improv-ing and stuff like they did back in 2002...Highlights were Brian singing "Getchoo", the crowd responses to "My Name Is Jonas" and "We Are All On Drugs", those awesome guitar solos from all 3 players, Pat's 3 second "Tom Sawyer" by Rush outbreakkkk (that was priceless), and Scott throwing that pick I got. ---Mike C.