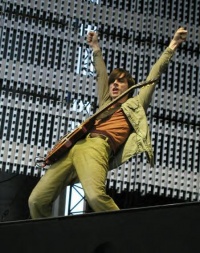 On July 2, 2005 Weezer performed at the Vegas Rocks Festival in Las Vegas, NV at the Silverbowl Sports Complex on their tour in support of Make Believe. The line-up also included the Red Hot Chili Peppers and The Adolescents.

...MB '05 Tour: Day 40: Vegas Rocks w/RHCP - Silverbowl Sports Complex, Las Vegas
today was epic! We got in a pair of SUVs at the hotel and headed over to the Silverbowl Sports Complex, which is located in the outskirts of Vegas next to the UNLV stadium. Im not sure what made it a "Sports Complex", as it looked a lot like a bare field with the stage and various outdoor festival stuff set up on it. Anyway, from the looks of it, all 50,000 of the people who grabbed the free tickets when they were given away a while back appeared to have made it to the show, having braved evil traffic jams coming into the city for the 4th of July weekend, and cruelly high temperatures of up to 109 degrees. I didnt catch too many people complaining. The mood out in the crowd seemed to be generally "yes, let's party - though its a bit too hot to get too crazy".

The Adolescents played first. They were an important part of the LA/OC punk scene, rising up when Black Flag and The Germs and The Circle Jerks did back in the late 70's. A few years back they reunited and have been periodically rocking it out ever since. Interestingly, this was not Weezers first time playing with the Adolescents! Back on March 13th, 1993, Weezer supported The then-reunited for the first time in years Adolescents at Bogart's in Long Beach, and had a challenging time with the very drunk and rowdy crowd who were definitely not interested in discovering the fledgling weezer! And in the lengthy period when the Adolescents were between their original run and their current revival run, bass player Steve Soto was in a band called Joyride, who shared the stage with weezer for many a pre blue album show back in '92-'94.

So anyway, its awesome that the Chili Peppers invited them onto today's bill. It was cool to see some classic, REAL punk rock going down. Then Weezer took the stage with a tight performance and enjoyed the benefits of the crisp new PA system and some of their updated audio gear (the rest had to go onto Kansas City in advance). As some commented, the audience was a little subdued, but were still very supportive and stoked. And as the temps were still around 100 degrees when the weez hit the stage, its not suprising that the moshing was on the mellower side. The audience was treated to the very first ever public performance of "Perfect Situation", and heard Rivers giving some kind words of support to the distant Live 8 efforts, before launching into 'Peace'.

The Chilis delivered a typically wicked set, including a few brand new numbers and a very nice jazz trumpet solo by Flea. The whole place was going bananas, and the eve was capped off with a Happy Birthday to Vegas fireworks display that pretty much devastated whatever eardrums were left intact after the concert! All in all a great night out in the desert...