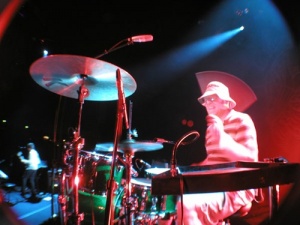 On July 5, 2005 Weezer performed at the 96.5 Buzz Beach Ball 1 Festival in Kansas City, KS at the Verizon Wireless Ampitheater on their tour in support of Make Believe. The lineup also icluded Cake, Story of the Year, Straylight Run, Embrace and The Fray.

...MB '05 Tour: Day 43: 96.5 Buzz Beach Ball 1, Verizon Wireless Ampitheater, Kansas City
The Verizon Wireless Ampitheater is kinda out in the middle of nowhere, but its a pleasent enough place with a huge lawn and seating area, well designed and competently staffed. Todays show was a radio show, Sort of like an 'acoustic Christmas' or 'inland invasion' type thing, but not quite as extensive. What was going down was five (4?) bands playing up on a stage set up on the lawn (Flee The Seen (?), Embrace, Elevator Division, Veda, and Straylight Run), plus 3 bands playing on the main stage in the ampitheater. First up on the main stage was Story Of The Year, who I at first thought was the band thats actually called 'The Soundtrack of our Lives' - and I realized from the first few seconds of their set that I was quite mistaken. No, Story Of The Year is not a Swedish pop band who are Oasis' faves, but an ultra heavy aggro US hardcore band! Well now I know the difference. Next on the main stage was the excellent Cake, who delivered the goods, making sure to end their set with the killer "Going The Distance". Weezer capped the day off with a really nice set that included the first live "El Scorcho" since 2002, as well as the first "Fall Together" since then, and the first ever public version of it with Scott on lead vocals. In fact, this was the first time Scott has (publicly) sang lead on any song, and he nailed it with style. "Perfect Situation" was in the set again, and man did it sound sweet! All in all great night, with over 13,000 people grooving to the music.

The Kansas City show rocked hard. It much resembled the sold-out amphitheater shows of the Enlightenment tour. The guys put on a really solid, energetic performance and appeared to be at top form. A powerful setlist filled with a couple of surprises made the show even more entertaining. Scott sang lead vocals on “Fall Together” which I believe has not been performed since 2002, and I must say he did an awesome job. Also, the guys finally unveiled “El Scorcho” for the first since the Enlightenment Tour and they really nailed it. The crowd was with the band all the way for every song (new and old) and Rivers and company were very appreciative of this. This memorable night was topped off with a powerful encore mixing classic Weezer (“Hash Pipe”) with a soon-to-be classic (“Haunt You Every Day”). Such performances indicate that Weezer is among today’s premier rock bands, and may one day achieve world domination! ---Stephen

Last night in Kansas City was mind blowing, to say the very least. I could never have asked for a better concert. The light set-up was amazing, the back-drop looked awesome, and, of course, the actual music was astounding. Weezer really blew the other bands away. There are not enough adjectives that I could use to describe the awesomeness of July 5, 2005. I wore a J.O.N.A.S. shirt last night and got some people interested in the Street Team, on another note. It was good to see so many Weezer fans in one place. When all the people around me were screaming every single word along with me, it felt like nothing else existed except for Weezer and the audience. It honestly does not get much better than that.Thank you so much for making my entire summer worthwhile by coming to Kansas City. Thank you for putting on the greatest show ever. ---Emma