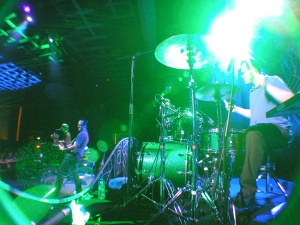 On July 14, 2005 Weezer performed in Atlantic City, NJ at the Borgata Casino on their tour in support of Make Believe. The opening band was The Fray.

We're deep in a casino in Jersey!
The Borgata is a huge new fancy casino, which is in a section of Atlantic City that Ive never seen before. The area looks like it was developed very recently on what looks to be pristine wetlands, which are still next door. The Borgata is neighbor to the Trump Marina, with its 80 foot yachts. We stayed in the hotel which is attatched to the casino and room where they concert was held, and a labryinthine series of service elevators and secret passageways took us between the two. Overall a pretty surreal scene, but no complaints here - we were treated well and everything went smoothly. In the afternoon before the show, a small planewas trailing a weezer banner behind it (much like the Vegas show), that had the universal banner and then "weezer make believe..." and then a bunch of words I couldn't make out.

At first we were worried that it was a 21 and up show because it was in a casino, but fortunately this was not the case and the crowd was huge, sold out and all ages with people coming from as far away as California! (shout out to Jamie!) The vibe was really warm in the room, with peeps showing a wide range of stoked reactions to the rock, including a bona fide old school mosh pit shoving circle during the closing song "Surf Wax America".

Then band came off stage united in their opinions that they had a great show, which doesntalways happen. There was a real sense of fun going on tonight, which has been slowly growing over the last several shows. The tour has hit its stride it seems. Pat said: "Harry Potter's cool and all, but tonight's show was about to put the wissawissawippawipp on you"

This was my 4th time seeing weezer. I saw them on the midget tour in 2001, the enlightment tour in 2002, and the first Make Believe tour this past May. TONIGHT'S SHOW WAS DEFINITELY THE BEST OF THE 4 WITHOUT A DOUBT.
1) Good location - I was in a great spot. Front and center. Not like under Rivers but close enough.
2) Good crowd. The philly show in May was RUINED by the awful crowd. It was horribly packed and horrificly violent. This time, the crowd was fun, and it did get pretty crazy sometimes, but I was NOT fearing my life this time.
3) Rivers was soooo energetic!!! Last May's Philly show, Rivers was deeaaaaad on stage. He did not interact. He had his eyes closed. He would barely budge for guitar solos. But this time he was insane! He was doing one epic guitar pose after the other, and for the first time in my experience, Rivers was very theatrical with his arms. He would hold his hand to his head with certain lyrics, or he would extend his arms a lot to the crowd during emotional parts. I can't believe how different he was just 2 months later. I feel sad for the people that went to the Philly show and did not go to this one
4) 3 SONG ENCORE, INCLUDING CLOSING WITH SURF WAX!!!!!!!!!!!!!!!!!!!!!!!!!!!!!!!!
The other shows only had 2 songs and they ended with Hash Pipe, which is simply a crime. But Rivers started talking about how the last song, they hadn't played in a long time, and bam, it was Surf Wax! I went NUTS. Suuuch a great closer. It was pure bliss
5) Perfect Situation was great live, and it totally had the heart and soul of the old material.
Low points
1) Peace was quite boring, and the crowd seemed really uninterested. It seems like for some reason the band thinks the crowd wants to hear this song, but it got a very underwhelming reaction.
2) El Scorcho was the only Pinkerton track.
3) Maladroit actually had 2 tracks played, compared to Pinkerton's one track. HOW COULD THEY LET THAT HAPPEN??? I think its really cool to hear Scott sing and all, but reallly, I'd rather hear another Pinkerton track then Fall Together. And Death and Destruction, although sounding beautiful, was unneccesary, and once again, should've been replaced with Pity, The Good Life, Why Bother, etc.
4) It should be illegal to have post-Pinkerton songs in the encore. Although HYED was very nice and a great song, we need CLASSIC material for the encore. And Hash Pipe, despite being one of the largest hits, does not quite entrall your emotions. But really, it was totally made up by ending with Surf Wax. GREAT choice!!! All-in-all, an amazing night!! ---funnyboy88

My brother and I just got back from the Weezer show in Atlantic City, New Jersey, and I must say it kicked some major behind. The opening act (The Fray) was quite good. I enjoyed them immensely, and I'm glad they got a good reception from the crowd. Tonight's show was great, kicking off a great performance with "Say it Ain't So." Scott did an incredibly spiffy job singing "Fall Together." I was so excited that they played "El Scorcho" (one of my favorites off of Pinkerton). All the songs they played were great. I was excited to hear "Perfect Situation" and all the other songs off of Make Believe. I went to the Philly show the day the album came out, and I can't decided which was more awesome, though both nights were fabulous. Rivers did seem a little more animated tonight, though, and that made it all the more excellent. I loved watching him get into alot of the solos. Brian sounded great on guitar (and keyboards), Scott sounded awesome, and Pat did wonderfully as usual. I made up for my lack of a camera at the Philly show tonight by taking probably over a hundred photos, which I plan to cherish forever. Thanks for such a wicked show! Weezer is most definately my favorite band, and always will be. ---Trish N., Haddon Heights NJ