From Weezerpedia
(Redirected from 50 Song Project)
Jump to: navigation, search 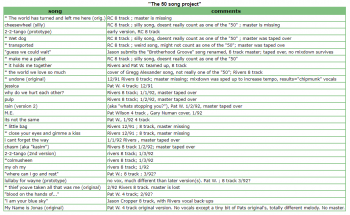 The 50 Song Project was a joint songwriting effort by Rivers Cuomo and Patrick Wilson that spanned December 1991 to January 1992. With assistance from Jason Cropper, the pair tried to write a total of fifty songs for their as-of-yet unnamed band. This group would eventually become Weezer, and several songs from the 50 Song Project would make it onto the band's debut album Weezer (The Blue Album).

According to Karl Koch in the Recording History, "Shortly after the first (and only) 60 Wrong Sausages show, the band was no more. Pat Finn was going through some weird times, and Rivers was losing interest in the band, finding more excitement in his own new song material. About this time, Rivers and Pat Wilson expressed a mutual interest in moving toward the type of songs that bands like the Pixies and Nirvana were doing. While there was no definite plan, they embarked on a songwriting spree, hoping to write 50 new songs between them, and from this new roster move forward with an unnamed new band. While no one knew it at the time, this new band would not include Pat Finn, but rather Matt Sharp (who still lived in Northern California at this point). It was a definite stylistic move away from the more rhythmic jazz/jam/riff oriented 60 Wrong Sausages, and consequently the different writing style of Pat Finn. They never quite made it to 50. However, the old Fuzz song roster was accepted as sufficient material, bolstering the list by at least 5-6 songs. Bush and 60WS songs were deemed too different for the new plan."[1]

Several songs from the 50 Song Project were compiled into the Weezer demo tape by Rivers Cuomo in 1992. Songs from this tape have been released throughout the years on the Alone: The Home Recordings of Rivers Cuomo, Alone V: Before Weezer, and Patrick & Rivers compilations. The project is notable for producing several songs released on Weezer's debut album, most notably "Undone (The Sweater Song)."