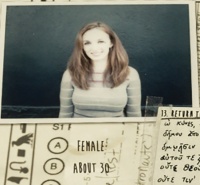 Cleo as seen in the album's liner notes

This page is about the character. For the song, see "Cleopatra".

Cleo is a character from the 2014 Weezer concept album Everything Will Be Alright in the End. She appears in the teaser videos portrayed by actress Allison Volk.

Cleo is an executive of Electric Records alongside George Blotkin. When the two meet with Sebastian, she smiles at him. It is implied that the two have some manner of relationship. She is implied to be older and more experienced than the character Bella. The album's liner notes pair her photograph with text that describes her as "female" and "about 30". An adjacent line of text reads "I can show you how it's really done". During the meeting, Blotkin and Cleo present Sebastian with a stack of mysterious books. Blotkin promises that they have "the most powerful and modern tools to guarantee [his] exposure to the greatest number of people." Sometime, possibly around 1994, Sebastian rejects their help, telling them to "enjoy their headphones", before taking the books and storming out. Also in the teaser videos, Sebastian's car is seen burning, as is a photograph of Cleo. The mysterious books are later seen perfectly intact in the burned-out car. The character is represented on the album by the song "Cleopatra", a song listed under the theme Belladonna. The song describes a woman whose beauty has faded. Regarding the album itself an a Rolling Stone interview, Cuomo said "The overarching theme of the album is an increased awareness of the impermanence of everything we took for granted." [1]