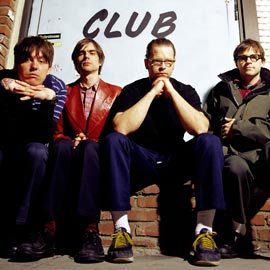 STOP THE MUSIC: Weezer steps on their record label's toes.

River's Edge
Weezer asks stations not to air new album. After making the tracks available to radio stations, the press, and on their website, the band has been asked by their label - Interscope's Geffen - to stop.
By Brian Hiatt


Why are Weezer asking radio stations not to play their fourth album, Maladroit? It's simple: The band sent tracks to the press and radio and posted MP3s on their website, but they still haven't submitted the CD to their label, Interscope's Geffen. Says frontman Rivers Cuomo: "They were very upset and said we have to stop. I don't know what the hell I'm doing, so I didn't really have a choice." Cuomo says the self-managed Weezer "started to veer off into outer space" last year and stopped speaking to Geffen after a fight. ("They said [the CD's demos] sounded too much like Lynyrd Skynyrd.")

With "Dope Nose" getting radio play, Cuomo says Geffen now wants to release Maladroit, which the band ultimately recorded on their own dime. But Cuomo's not sure he'll give the label the masters, though he knows that could spell trouble. "Unfortunately, they have the right to claim ownership of the tapes. It's totally unfair." A label rep declined to respond, except to say, "When Rivers is ready to put out his record, Geffen is ready to put it out."