Weezer Teams with Muppets
"[Weezer are] rock stars, they're used to being around animals, bears and egotistical pigs." — Kermit the Frog

Just when you thought they couldn’t get much sillier than in their video for “Buddy Holly” in which they time-traveled back to the set of the squeaky-clean television sitcom Happy Days… Well, Weezer has managed to top even themselves in the latest video for "Keep Fishin’”. This time, the band teams with Kermit the Frog, Miss Piggy, Gonzo the Great, Pepe the King Prawn and the rest of the Muppet gang. For Weezer, working with Henson Studios was a chance to live out a childhood fantasy. The Muppets themselves praised the band. "Weezer fit right in," Kermit the Frog said in a statement. "They're rock stars, they're used to being around animals, bears and egotistical pigs." Weezer now join the ranks of such musicians as Elton John, Alice Cooper, Debbie Harry and John Denver, who've all been guests on The Muppet Show. We caught up with bassist Scott Shriner to recap the experience and all the salacious details: 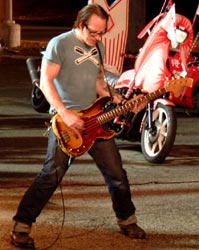 Fender: We heard it was your life-long dream to team up with childhood heroes, The Muppets.

Scott: For me, to tell you the truth, I was at that funny age when I didn't think it was cool to like the show. My mom (Catherine) and sister, (Lori) were huge fans. I remember walking past them to go out and break windows, or what ever I thought was cool at the time, and seeing them so into it and laughing and having a big time...I would stop and watch for a minute and think, ‘I am too cool for this... I will go out and throw rocks at people's windows…now that is cool!’

Fender: What was it like working with them? Are they still humble about their massive commercial appeal?

Scott: No, not at all. That Pepe was such a handful... hahahahah!

Fender: Were there artistic differences or politics involved as Muppet band bassist Floyd Pepper (left) was noticably absent in the video?

Scott: It is funny that you should mention that...we are actually friends and have covered for each other on occasion. Right now, he is out with Slipknot, and it is taking a lot out of him. So he said, “Man just go ahead and take this one." Thanks Floyd, what a bro... much respect...for Floyd and Slipknot...

Fender: Is the Shrimp character in the video really the Long John Silver fast-food mascot?

Fender: Is it true that after filming the video, Rivers was romantically linked to Miss Piggy? Or was there some off screen chemistry with guitarist Pat?