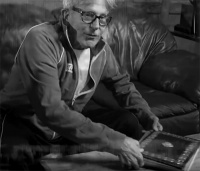 George Blotkin with the mysterious books, as seen in ewbaite 14 "I've Had It Up To Here" Pt. 1

George Blotkin is a character from the 2014 Weezer concept album Everything Will Be Alright in the End. He appears in the teaser videos portrayed by Jeff Greenberg.

George Blotkin is an executive of Electric Records alongside Cleo. During the meeting, Blotkin claims to be a fan of "the deeper cuts, like "El Scorpio". Blotkin and Cleo then present Sebastian with a stack of mysterious books. Blotkin promises that they have "the most powerful and modern tools to guarantee [his] exposure to the greatest number of people." Sometime, possibly around 1994, Sebastian rejects their help, telling them to "enjoy their headphones", before taking the books and storming out. Also in the teaser videos, Sebastian's car is seen burning, as is a photograph of Cleo. The mysterious books are later seen perfectly intact in the burned-out car.