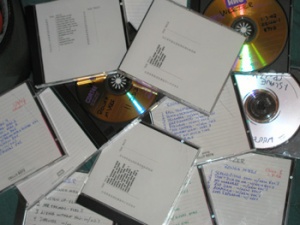 CD-R's from the Maladroit sessions, January 2002.

Weezer wrote and recorded hundreds of demos for their fourth album, Maladroit. Utilizing at least eight distinct studios all over the U.S., the band developed the album over the course of roughly a year, with Rivers Cuomo beginning to prepare solo demo recordings mere weeks after the release of Weezer (The Green Album) in May of 2001. Maladroit was eventually released on May 14, 2002.

The band's schedule during this year was an aggressive one, at least partially due to Cuomo's recent decision to manage Weezer entirely on his own. He booked ad-hoc recording sessions between the band's Green Album tours and press cycle, used soundcheck sessions and concert setlists to teach the band new songs, and even leveraged radio station studio sessions - normally reserved for promoting previously released singles - to practice and release new material. Adding to the intensity of this experience, Mikey Welsh would depart the band about one-third of the way through this tandem touring-and-recording schedule. Welsh was replaced by Scott Shriner, who first went into the studio with the band in August of 2001.

The formal "Maladroit sessions" were recorded at Cello Studios from December 2001 through January of 2002. As such, the term "Maladroit demos" is sometimes used to refer to recordings from these specific sessions, or - even more specifically - the MP3's distributed to fans on weezer.com during the lead up to the album's release.

Cuomo began recording low-fidelity demos for the band's follow-up to Green around July of 2001.[1] Twenty years later, he would refer to this period as his "nadir, if not as a songwriter/artist/human being, at least in terms of recording quality."[2] Cuomo released a digital compilation of these demos in 2020 as Alone VIII: The Maladroit Years. 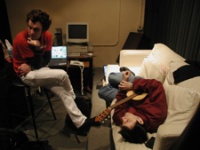 Weezer booked studio time at Monster Island Studios in Washington, D.C. on May 27, 2001 during a stop on the band's Hooptie Tour in support ofThe Green Album. The demos were recorded for the purposes of sending to potential producers for the band's planned album.[3] Of the thirteen songs attempted, ten songs were finished, with eight later seeing release for free on the band's official website. The band had already given the songs some shape during soundcheck while on tour, and played some of them live at a show in St. Louis a week before[4].

The 2001 BBC Sessions were songs recorded for the Radio 1 show The Evening Session, hosted by Steve Lamacq, on June 13, 2001. The session took place on Cuomo's birthday. As described in a Karl's Corner post from the day[5], the session was "quite a battle" between the show's producers and Cuomo, as he was insistent on the band using the time for demoing new material:

The band was asked to do 4 songs, including "Hash Pipe", "Island In the Sun", and a cover. However, the guys were so excited about having an opportunity to record, that they convinced BBC to let them do all new songs! And not only that, they worked extra fast and recorded 8 songs as opposed to the required 4!

Four of these eight songs were completed and aired on BBC radio, with the remaining four finished the following month during a separate recording session in Los Angeles on July 9[6]. This session was somewhat ad-hoc, as the shoot for the first "Island in the Sun" music video was delayed, and the band decided to book a studio to fill the time[7]. The recording of "December" that resulted was later released as a free mp3 at the band's official site, and the four broadcast tracks were bootlegged and distributed among fans. 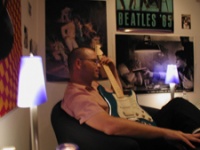 Weezer recorded demos at Sage and Sound Recording in Los Angeles from August 29 through September 8, 2001. These were the first studio sessions to feature bassist Scott Shriner. Of the songs recorded, most were laid down for the first time, and several were performed live throughout the year, with some eventually appearing on Maladroit. Seven of the 24 songs were released for free on weezer.com. Recording personnel involved included Bobby Shneck (guitar tech)[8], Atom Willard (drum tech)[8], and Joe Barresi (engineer)[9] were present during the sessions.

Cuomo's personal assistant Sheeny Bang posted updates in Karl's Corner posts throughout these sessions. She described the August 29 recording as indicative of Weezer's intensive schedule at the time:

In what I'm beginning to learn as true Weezer fashion, our "down time" was spent with the guys demo-ing six new songs in the first day of a three day session. They should have started around 2pm but there were some massive technical difficulties with what sounded like everything. Bobby and Adam [sic] had a busy day trying to get everything up and running and Rivers finally got the call to come down to the studio around 7pm. They were all set up so it was literally minutes between walking in the door and then the tapes rolling. Everyone at the studio was amazed with the speed that the guys worked at, and in what seemed like no time they were done. The songs sounded great and it was cool to hear them in a near to final stage after following a few of them from their birth. 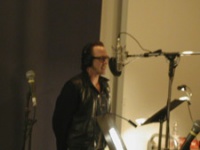 Scott Shriner recording vocals at the studio for the Seattle-area radio station 107.7 The End. Photo by Karl Koch.

Weezer recorded three songs for Seattle-area radio station 107.7 The End on November 14, 2001. Koch described the session as having gone "pretty smooth," with the band completing " 5 or 6 takes of each song before they had a version they were happy with."[10] The intention was for the station to play the recordings as exclusives, but when it became apparent that the songs weren't going to be aired, they were instead released on weezer.com[11]. Initially, a full-length version of "Space Rock" was released, then replaced with a shorter edit.

Weezer recorded Maladroit at Cello Studios in Los Angeles from December 16, 2001 through January 10, 2002, receiving additional overdubs on January 11 and January 12. The album was mixed from January 13 through late January. The international bonus track "Living Without You" was recorded in April of 2002.