"Great Big Blue" is a song by the Rentals. It is the ninth track track and seventh single from the band's fourth album, Q36, and was released on January 28, 2020.

"Great Big Blue" was inspired by the 1986 Space Shuttle Challenger disaster, in which the Space Shuttle Challenger broke apart during launch, killing all seven crew members aboard. The song's optimistic tone has been criticized for being in poor taste by some [1]. The limited-run merchandise item for "Great Big Blue" was a tote bag featuring a design by Ivan Minsloff.

Today marks the 34th Anniversary of the Challenger disaster. To honor the fallen Space Shuttle Astronauts, The Rentals are releasing “Great Big Blue”, a song based directly on the tragedy.

Outside the thermometer reads 31 degrees
Our families in the bleachers, bundled up so they don’t freeze

The inspiration for the song came after Matt Sharp accidentally came upon a video of raw, uncut CNN news footage of a select group of school children and families of the seven Challenger astronauts watching the take-off, and tragic aftermath, from the bleachers about 3 1/2 miles away from the launch pad, at Cape Canaveral.

The five unfiltered minutes of close ups of spectators’ faces left a lasting impression... “The scope of emotions, in those images, absolutely has had a profound impact on me,” states Sharp. “As the camera moves across these beautiful, colorful faces, all glowing with pride and joy; beaming with the optimism from the limitless potential of their children, the camera operator captured the best of what we can experience in this life. Then suddenly that joy fades into a haze of uncertainty and confusion; ultimately morphing into the horror and the worst of what we face in the human experience.”

Sharp continues, “The song itself primarily focuses on the moments before the launch and that is why the music and melody have a more optimistic tone than what you expect from something associated with and inspired by such a devasting tragedy. In these moments, I was solely thinking about the great pride the mothers and fathers of the astronauts must have been feeling, just prior to lift-off and the equally, prideful rush the astronauts themselves might have experienced as they shared this monumental moment with their families and the rest of the world.”

The instrumental arrangement of “Great Big Blue” desires to reflect the myriad of colors contained in the themes of pride, optimism and abundant joy. Along with lead vocalist and lyricist Sharp, guitarist Nick Zinner, drummer Ronnie Vannucci, and a make-shift choir of gifted singers have all come together to convey this mix of basic human feelings and emotions. In the pursuit of this sound, with Dave Fridmann behind the mixing desk, The Rentals have reconnected to a musical approach and an exuberant sensibility that fans of their debut (Return Of The Rentals) are likely to recognize and appreciate.

It is with this heartfelt musical collaboration and sincere, thoughtful lyrics - inspired by our 7 American Heroes - that The Rentals wish to pay tribute and humbly dedicate the song’s 3 & 1/2 minutes to the loving memory of Francis R. Scobee, Michael J. Smith, Ronald McNair, Ellison Onizuka, Judith Resnik, Gregory Jarvis, Christa McAuliffe and the families of the innocent victims, as well as, the NASA family at large. May their spirit and legacy live on, each time we look to the sky and audaciously dream to venture beyond the great big blue. 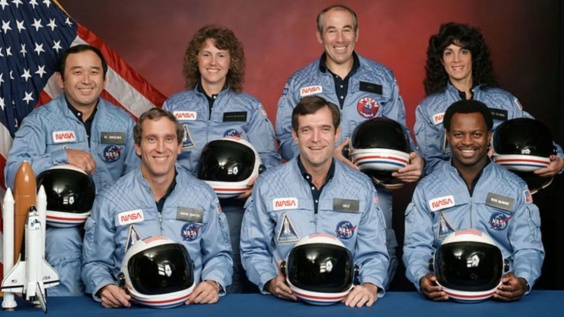 On January 7, 2020, Matt Sharp announced via social media[2] that he would be remixing a series of songs from Q36 and releasing them under the title Z36, beginning with "Invasion Night". "Great Big Blue" was the second remix to be released, on February 7, 2020.

Frigid Tuesday morning, waiting for the winds to die
Shake the Magic 8 Ball; ask if everything’s all right
Outside the thermometer reads 31 degrees
Our families in the bleachers, bundled up so they don’t freeze

We skate across the launch-pad, anxious sled dogs on the ice
Tidal wave of darkness waits above the morning sky
Strapped onto the rocket, after multiple delays
Came down with “Go Fever”, after 6 or 7 days

Lost in wonder, dreaming how it feels (how it feels)
Blasting off from NASA’s frozen fields