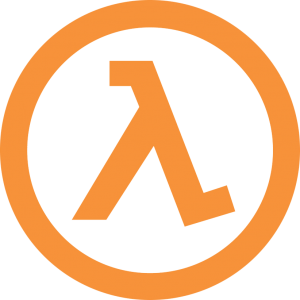 A Lambda symbol, which is used as the main logo for the Half-Life series

Half-Life is a series of first-person shooter games developed and published by Valve Corporation. The games combine shooting combat, puzzles, and storytelling. The original Half-Life was released in 1998 to critical success, followed up by a sequel in 2004, Half-Life 2, which reached even further success. The series has had multiple expansions, such as Opposing Force in 1999, Blue Shift and Decay in 2001 for the original game, and episodic games Half-Life 2: Lost Coast in 2005, Half-Life 2: Episode One in 2006, and Half-Life: Episode Two in 2007.

Half-Life 2: Raising the Bar also had an alternate version called the Uncorrected Proof. This version of the book was never meant to be sold or distributed, and was only meant to be looked at and corrected to ensure that any misconceptions or errors by the authors and supervisors were removed. A copy of this version eventually was sold on eBay to a fan of the series, and the pages were promptly scanned and uploaded online. In this version, it goes much further into detail on many other subjects, most of which never made it to the final book.

Section .11, titled "Metamorphosis: Extra Life for Half-Life", goes in depth on various special versions and collectors editions of the original Half-Life. On page 161, which discusses the release of the Half-Life Platinum Pack, there is an image of two Half-Life themed guitars. The subtitle reads:

"The Half-Life guitar, constructed for the band Weezer" 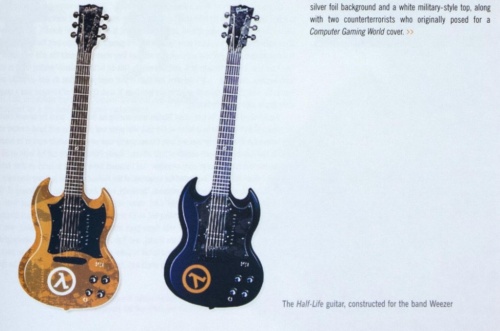 A screenshot of the guitars straight from the book

The cover of the first Half-Life game, for comparison

It is currently unknown when these guitars were given to Weezer, if these guitars are still in the hands of Weezer, if they were ever even given to Weezer, or if they even exist in the first place, as they are only in the Uncorrected Proof, and never show up in the final release. If they do exist, they were most likely created as promotion, and said promotion never happened.