From Weezerpedia
(Redirected from Harvard University)
Jump to: navigation, search

Rivers Cuomo applied for Harvard University while visiting the campus during a tour stop in Cambridge during Weezer's tour for The Blue Album. He was accepted as a second-semester sophomore and attended semesters in fall 1995, spring 1996, spring 1997, fall 2004 and spring 2006.

Letter For Readmission To Harvard--2005

This letter is to inform you of my intention to return to Harvard next semester and to fill you in on what I’ve been up to since I left.

After final exams in January, I went to Los Angeles to finish Weezer’s fifth album, Make Believe, which debuted on May 10 at number 2 on the Billboard album chart, our highest position ever, and which was just certified platinum. The first single, “Beverly Hills”, went to number 4 on the pop singles chart, making it our biggest hit ever by far. The current single, “Perfect Situation”, and its video, are doing well also. The album received mixed reviews but I believe it is one of our best.

Since Make Believe was released, Weezer performed with many other top artists including an extended tour with the Foo Fighters and one-off gigs with some of my biggest influences, Oasis and Public Enemy. We toured all over Europe, America, and Japan and broke new ground in Brazil and Mexico. We worked purposefully to improve our show and I worked especially hard to improve myself as a front-man. Almost all fan reports and critical reviews expressed surprise at the improvement in our show.

We did a lot of publicity, including a cover story for Rolling Stone magazine and performances on The Howard Stern Show, Late Night With David Letterman, The Tonight Show With Jay Leno, and The Jimmy Kimmel Show.

We made two of our best videos, I think, for the singles “We Are All On Drugs” and “Perfect Situation”. We took these projects as artistic challenges and worked really hard. I pushed myself particularly in the domain of acting—which I’d completely shied away from since childhood.

Throughout the year, I downloaded the most popular songs on the Billboard Hot 100 and listened to them on shuffle as I ran on the treadmill. Similarly, I read many of the bestselling books, both fiction and non-fiction, including Ron Chernow’s biography of Alexander Hamilton, Azar Nafisi’s Reading Lolita In Tehran, Chinua Achebe’s Things Fall Apart, Levitt and Dubner’s Freakonomics, and Dan Brown’s The Da Vinci Code. I read Newsweek magazine fairly regularly. I got a better sense of the medium in which my work exists, where I want to fit in, and where I don’t.

I kept a web-log that which received about 700,000 page views. I wrote articles for Ellegirl and Jane magazines, one called “My Apartment” and the other about my trip to Asia. I view my literary efforts as just another means of being creative and hopefully spreading a positive influence.

I traveled to India to visit my meditation teacher S.N. Goenka and to Myanmar to see the sites related to our tradition. Unfortunately, I couldn’t meet with Mr. Goenka because of his sudden ill health, but I still received tremendous inspiration from visiting the home Vipassana center and meeting so many other serious meditators. The trip was documented for possible inclusion in a film.

I attended several Vipassana meditation courses around the country including the 20-day course in March in Massachusetts. I also studied the Buddha’s discourses and other critical and historical texts related to the Buddha’s life and teaching.

I got closer to my parents, uncovering within myself a sense of responsibility for and connection with them. My mother is now a Vipassana meditator too and I am enjoying the feeling of security and support that comes with having multiple generations within a family walking on the same spiritual path. My father saw me perform this year for the first time and we are getting to know each other after not having much contact while I was growing up. I appreciate the sudden fatherly influence in my life and am surprised at how much we have in common.

I am looking forward to coming back to Harvard in the spring and finishing what I started back in 1995. My motivation is much different now than it was then: then I was terribly discontent and dreaming of being a classical composer, a writer, or basically anything that I wasn’t; now I just want to enjoy my life and do the responsible thing—graduate.

Take care. I will see you soon.

By Cuomo's own account, he spent a miserable year in a single room. The previous spring he had undergone surgery to correct a physical defect (his right leg was almost two inches shorter than the left). During that first year at Harvard his right leg was in a metal frame; every day he would tighten the screws to elongate the bone. Between classes, Cuomo took painkillers and rested in bed. "I grew a long beard and walked around with a cane," he said. "The only time I could write songs was when my frozen dinner was in the microwave. The rest of the time I was doing homework." His only consolation was listening to opera, mostly Puccini. During this period he wrote the songs for Pinkerton. He dropped out of Harvard at about the same time, two semesters short of graduating.

Returning to Harvard before Make Believe 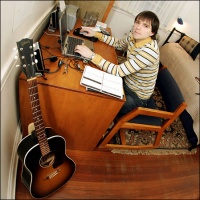 Upon returning to Harvard in 2004, Cuomo lived in a modest 14-by-9-foot room with the standard-issue desk, bureau and bed, to which he has added only a map of the world, taped to the wall, and a small Oriental rug bought for less than $200 by Sarah Kim, his personal assistant.

Cuomo during his graduation ceremony.

Cuomo graduated in June 2006 with a spot in the academic honor society, Phi Beta Kappa.