Posted on Weezer's official Facebook page as part of the "Today in Weezer history" series on January 5, 2014.

Today in Weezer History: 1/5/2001 - 9th day of work on The Green Album / Pat gets "Jaywalked". Today in 2001 work continued on The Green Album. First, "Starlight" got a surprise re-do from the ground up, then Mikey resumed doing his bass parts, nailing down "Starlight" and 3 other songs. Meanwhile, that morning, Pat was hanging at his hotel room (at the Oakwood Apartments near Burbank, where many a musician and actor have been temporarily housed while working in L.A.) when he got a knock on the door. It was Jay Leno, going door to door for his "Jaywalking" Tonight Show segment, looking for people to dress up and sing as Elvis, while a pro Elvis impersonator tagged along and taught the people how to properly do Elvis. Pat was game and ended up being featured on the segment, which aired on Jan 9, 2001. Weezer.com immediately offered a proto-webisode of Pats part of the segment, filmed off a TV. Today that same clip is on youtube in that same tiny lo-fi resolution. Photo shows Rivers with Atom Willard's dog Moso (Atom was working as a tech/assistant for weezer at the time), and a still from the Leno clip. 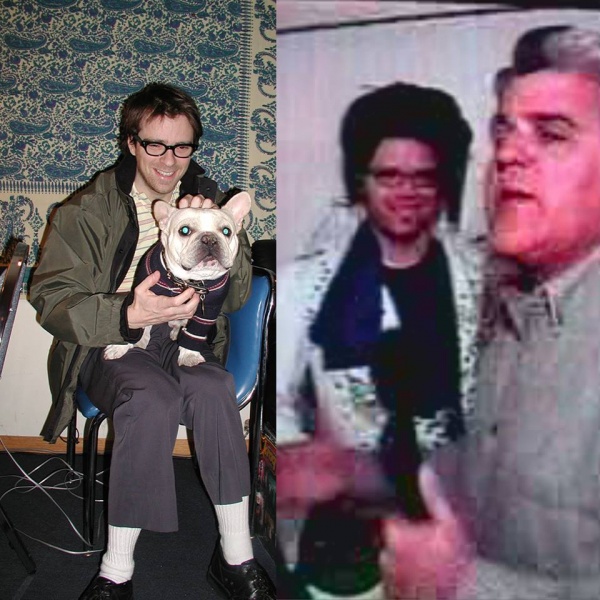