I Don't Want to Let You Go

From Weezerpedia
(Redirected from I Don't Want To Let You Go)
Jump to: navigation, search

I Don't Want to Let You Go (originally named I Don't Wanna Let You Go) is the tenth and final track on the standard edition of Raditude. It is also the seventh track on Alone II.

Weezer lead singer Rivers Cuomo wrote "I Don't Want to Let You Go" song while Weezer was on tour in Europe in 2005. Cuomo is proud of the song, as evidenced by its appearance on The 4 and 5 Star Demos of Rivers Cuomo. It was originally part of the demo compilation Deliverance at Hand! and was most likely demoed in sessions for Weezer (The Red Album), but it did not make that album. The Rivers demo saw release on Alone II.

The song would later see a completely new arrangement on the band's 2009 album Raditude.

Rivers: Yeah, we decided to close the album out with a very beautiful, etherial ballad. It's very haunting, kind of 50s sounding, nostalgic. But at the same time it's like it's from another planet.

Brian: Something fresh about it too and it's the most common chord progression there is in Rock And Roll, it's I-VI-IV-V. [1] 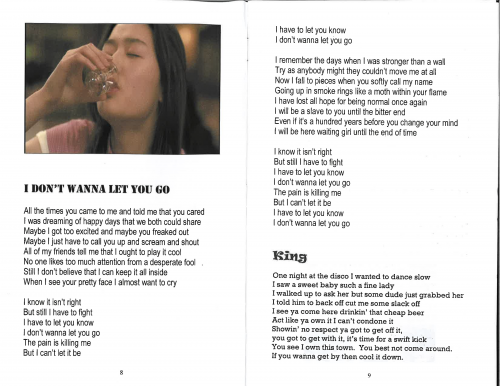 Lyric sheet from the Deliverance at Hand! booklet.