Julia Nunes (born January 3, 1989) is an American musician. She rose to popularity through Youtube, performing both original compositions and covers.

On March 21, 2006, Julia Nunes created a channel on the video-sharing platform Youtube. Throughout the next several years, her Youtube channel would feature a mixture of her own songs and covers of more famous songs. Notably, on December 17, 2007 Nunes released a cover of the Weezer song "Keep Fishin'." This video would eventually amass over a million views.

Two years later on June 12, 2010, Nunes would join Weezer on stage at Bonnaroo Festival for a performance of the song "Trippin' down the Freeway."[1] This appearance was made possible by Nunes' fans requesting Cuomo to perform with the ukulelist on Twitter. She had originally planned to perform ukulele during the performance, but only sang vocals due to her instrument being out of tune. 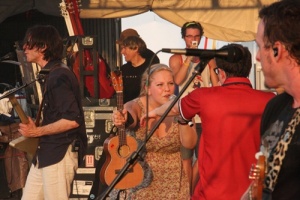 Nunes performing on stage with Weezer.