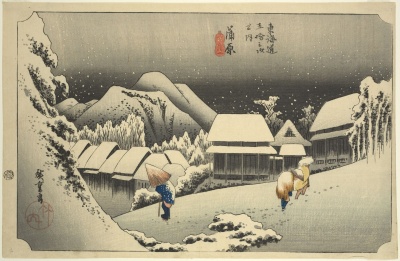 Kambara Yoru No Yuki ("Night Snow at Kambara") is a print made by Japanese ukiyo-e artist Hiroshige. It was used as the album art for Weezer's second album, Pinkerton.

Rivers Cuomo confirmed in a November 2020 "Riverpedia" post that he chose the image because it appeared on a postcard sent to him by Jennifer Chiba, adding that "it captured the feeling of winter loneliness that I was feeling in Cambridge".[1]

A diorama of Kambara Yoru No Yuki was included in the Pinkerton Deluxe autographed collector's edition, which was sold on weezer.com in 2010. The set also included an autographed photo of the band, and a CD copy of Death to False Metal.