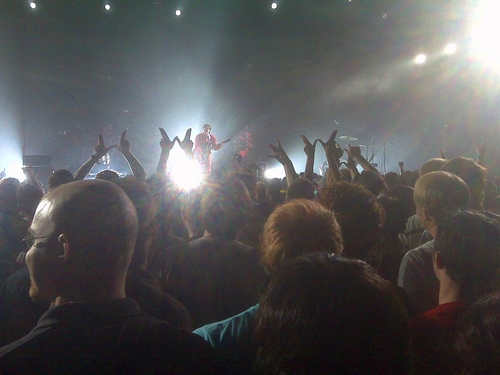 BIRTHDAY UPDATE 2/1
Happy Birthday to PATRICK WILSON!!!! Rock Hard, Rock On, Rock Well. You do, and shall.

So, when people think "radio single" they tend to think, "3 minutes long or less" "verse chorus verse", "simple". They probably wouldnt think a 6 minute song with a repeating structure and 10+ different musical styles would work on the radio. But Weezer is starting to prove them wrong, with your help. "The Greatest Man That Ever Lived (Variations On A Shaker Hymn)" is the 3rd single (and possibly the best song) off of the Red Album, and its starting to climb the Modern Rock charts now, thanks to airplay - in large part driven by your requests. Its up several spots to #36 this week, and it can keep climbing, winning over stations, with your help! Is your local station too frightened to play it? Or can they step up to the grown ups table? It's on you, folks!

...Another new and interesting interview with Rivers, with The Onion's AV Club.

Rivers talks for 20 minutes about the making of "The Greatest Man That Ever Lived"! Courtesy KROQ L.A.

...Today's pic is direct from a fan - it's up for voting on Brickfish - help our weez fan/photog win a scholarship!