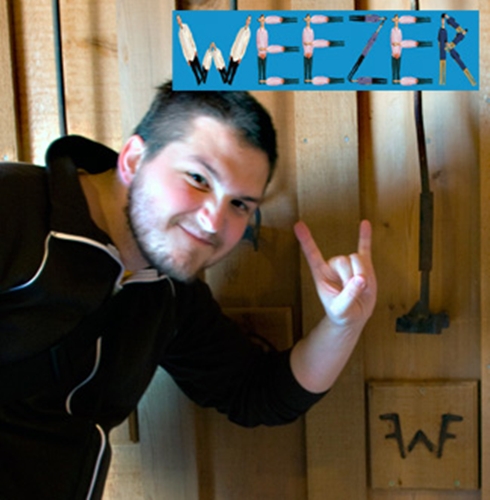 ...Check out this tasty video combo on Spinner.com - Clip 1 is the 20 minute Rivers talk about creating "The Greatest Man That Ever Lived", and clip 2 is the performance of 'Greatest Man' at the 11/25/08 Rivers show at Fingerprintz in Long Beach, CA. Epic!

...Rainn Wilson and Rivers. Now that's the kind of combo you just can't beat. Not even with a stick. (And yes, theres a LOT more to the story... stay tuned!)

...Weezer tribute album mega alert!
Some very clever and talented fans have recorded an album of Weezer (and/or Weezer related) covers, specifically of the songs that Rivers had planned on releasing under the name "Homie" back in '98, but never did, as well as some related "between Pinkerton and Green" songs. Theyve called this cover project HOMiE (in reference to the Brian Wilson "SMiLE" album) and you can hear it for free right now. Check it out, it's a high quality experience. Big ups to Runnersdialzero and Lifetaker!

Todays picture is a hybrid of Tatiana K.'s logo and Kyle C.'s brand discovery at the National Ranching Heratige Center. Thanks guys!