...after several days of wondering how it was gonna turn out, the guys finally got a peek at the rough cut of the new "Dope Nose" video the other day, and they liked what they saw! Onlookers commented that the band looked really good and it was truly action packed. They requested a few alterations and made a few suggestions, and then awaited a more refined edit, which came today. This one was more carefully cut and edited, and is much closer to the final version. Im not sure when it will be shipped off to the video networks yet, but its getting closer!

this all added up to an extremely long night of recording! Additionally the guys had a photo session, this time for Amplifier mag. There also has been a high amount of discussion lately, mostly debates over the various plusses and minuses of using producers, various recording techniques, touring concerns, etc. Also the foosball saga continues, the Coalition of Rhythm team currently leading the Force of Rock team 126 games to 122.

On Wednesday (4/16), it was quite a short day. The band worked on Modern Dukes for a while, then called it for the day as they all had stuff to do elsewhere.

Today (Thursday 4/17), they went back to the usual working long and late thing. No info on what was done yet. 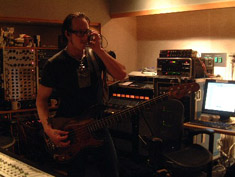 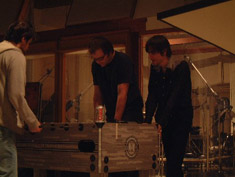 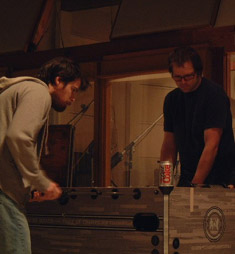 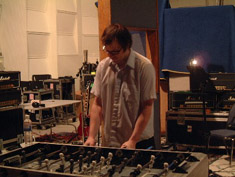 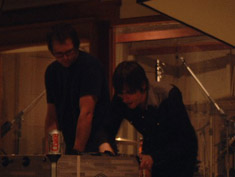 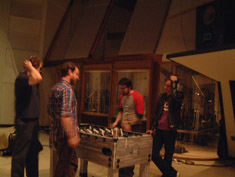 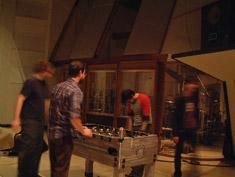 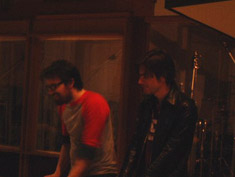 Note that there is NO 'Dope Nose' commercial ("for sale") import single YET in the works, as this is more likely to be a later-in-the-summertime thing.

Note also that while the bonus tracks are exclusive to the import editions (though anyone in the USA wont be too worried about missing "Island", as its the same as on the Green Album), the 'extras' mentioned above (details not available yet as to what these are) are going to be on ALL versions of Maladroit, including the US one.

...users of AOL Instant messenger (AKA The Devil, AKA The Most Useful Free Thing of The Past 20 Years) recently got a little unexpected weez in their 'welcome' window, with a little promo thing for Dope Nose and Maladroit (albeit spelled wrong...) 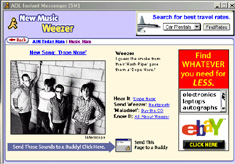 ...Heres something from the UK rock mag "Kerrang"- They held a readers poll for the '100 coolest stars', and Rivers was voted in at #46! "...Rivers Cuomo (Weezer). The geek who inherited the world and promptly threw it aside, Rivers Cuomo is a complex little man,seemingly both in thrall to,and disgusted by, rock'n'roll. Cuomo writes the most perfect pop-punk tunes on the planet and he's referred to as a minor deity by everyone from the Deftones to Ash. But whether this makes him happy or not is anyone's guess...." (thanks to Nicola!)

...several people in the Chicago Metro area have been spotting weezer billboards, place by Chicago's Q101 to advertise the station. "...I was driving to my soccer game this morning down interstate 294 in Lake Forest, IL and I glanced off to the left side of the road and I saw what I thought to be a big picture of Brian's face. Thinking I was seeing things, I checked again and sure enough I realized it was a huge billboard for the radio station...it was only Brian, Rivers, and Pat because the picture was taken before the time of Scott..." ---Kat
"...Heading South on I-94 in Lake Country IL, just before Lamb's Farm is a Billboard for Q101 with pictures of Weezer all over it. I didn't get a good look because I was trying to keeping my eyes on the road..." ---tom

...odd story #309201:"...Recently I took a trip to Holland to stay with my girlfriend. One day we visited a place called Utrecht and went to check out their Centraal Museum. They're running a special exhibition at the moment called FFF Videoshow. The exhibition is a maze of different rooms, all set differently and with a different theme playing different kind of videoclips - adverts, TV clips, music videos etc...Imagine my surprise when I walked into an artificially sunny, sand covered beach-style room and saw Weezer's 'Island In The Sun' (Spike Jonze version) being looped on one of the four walls. The song wasn't there - there was some different audio going on - just the video playing silently. The theme of this room was "Feelgood"...The white object you can just see in the front is a fridge, and for some reason it was filled with drinks. Very strange exhibition. FFF Videoshow is on at Utrecht's Centraal Museum until May 26th..." ---Jonathan 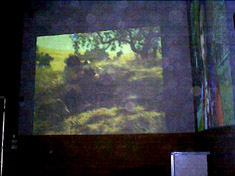