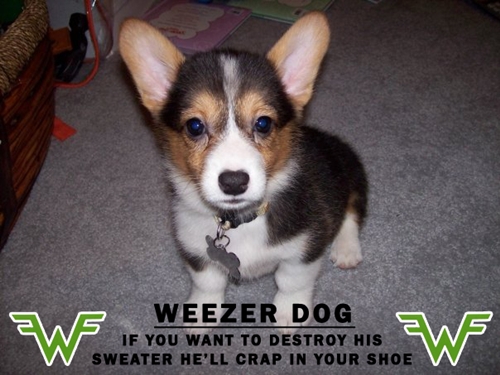 ...OK folks, first of all, for anyone searching for the new Rivers "Not Alone" DVD and CD yesterday and today, only to not find it, our apologies. There was a release date change to next Tuesday, 5/5. But we weren't informed about the change until too late. So you will have to wait a few more days. Again, apologies for any confusion or inconvienience.

In The meantime, here's an exclusive 'Not Alone' video over on Entertainment Weekly - "El Scorcho"!

... the tour dates people have found over on Buzznet are NOT correct. Real tour info is in fact coming, but has not yet been finalized for release to the public. Stay tuned for bona-fide announcements via weezer.com, weezer myspace, and the weezer mailing list.

...Rentals update! Folks, you may be aware of former weezer bass man Matt's band, The Rentals. But you may not have been aware that they are releasing a new album this year, titled "Songs About Time". And you also may not have known that they are releasing it in 3 stages, and the first 4 songs are available now! Its great stuff folks, check it out - and now you know.

...Weezer Tribute band special edition! Jose and Ryen from Ozma (with some dudes from the band Teaneck) are doing a special one-off show May 16th at the Knitting Factory in Hollywood. They will be playing the Green Album in its entirety! ("Including 'I Do'", says Jose. "The Green Album came out may 15 in 2001 so its a true 8 year anniversary celebration.")