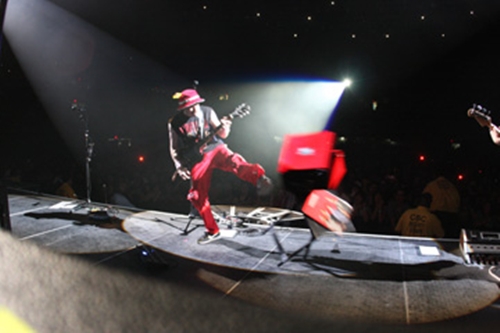 **UPDATE 5/5**
Another show announced: July 24 at the Jisan Valley Rock Festival in South Korea! This will be Weezer's first ever show in Korea! (As for how to get a ticket? Hmm... anyone know how to read Korean? Don't think theyre available yet,in any case.)

....Folks, heres the new scoop - Weezer is headlining the KROQ Weenie Roast on May 16th, at Irvine Meadows in Irvine, CA! If you are or will be in SoCal at that time, clear your calendar and come on down to catch the first Weezer show since last fall! Of course Weenie Roasts feature a big list of bands (including Kings Of Leon, Jimmy Eat World...Silversun Pickups... Rancid... to name a few!) so theres plenty to take in... But particularly the Weez of course! Check Kroq.com for more details, as tickets will be going onsale May 7th only at livenation.com!

...On another note, if you don't know about this, you need to check it out: Original Weezer bass player Matt has an all new Rentals project underway, and they are literally cranking out an audio visual feast on a daily basis over at TheRentals.com. As they record their new album "Songs About Time" over the course of the year, they release new studio photos every single day, a new film every single week, and then a sweet dose of new music every 3 months - all through 2009. Just last week they released their latest film, the music video for "Song of Remembering". This song features Joey Santiago of the Pixies, who appears both on the track playing guitar, and in the video at work in the studio. This is just one example of the cool stuff going on at TheRentals.com - and nowhere else. You even get a free song, just for signing up on their email list! (If it sounds like I'm excited by this stuff, well yeah, I am. Its cool stuff!)

Hawaii's Goat Punishment are playing a surprise show at the University of Hawaii Manoa Kwiki-mart style shop on campus May 6th at 6pm, and again on May 8th at The Spot.

Jarkarta, Indionesia's Starwick will playing an all weezer cover show on may 7th, at the special event "Funkin epic: a tribute to weezer, faith no more and rage against the machine", at Mario's Place.

And a multi weez-tribute band event including Atlanta's El Scorcho and more: The "Geek Rock" show at Lenny's Bar in Atlanta on May 29th, with Kochis, The Warm Fuzzies, and El Scorcho, all who will be working songs by their favorite band weezer into their sets.