...today, after a 5 year wait for a new weezer record, fans all across the country picked up a whole hell of a lot of Green albums. I can't beleive the day has finally come! Its like I can finally exhale again. Wow. Here in L.A., the event was celebrated at a special in-store show at the Tower Records on Sunset Blvd., where, interestingly, 10 years ago Rivers had a job. What a show! Outside of a lack of some sort of barricade system resulting in some injuries for crushed fans and security guards alike, the show was intense and tight! outside there was an additional PA system and Jumbotron screen for those who couldnt fit inside the store, and many reported excellent sound even outside! Also today the guys were interviewed by Pat O'Brian for "Access Hollywood"! Check out the pics, and I'll try to get a video up tomorrow. 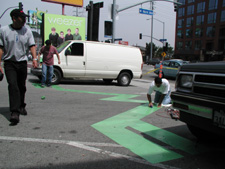 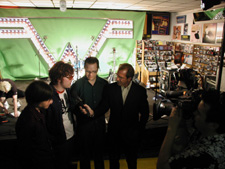 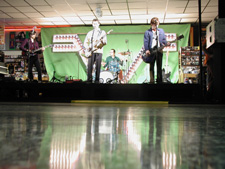 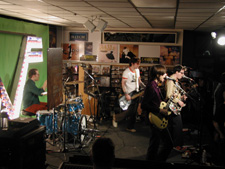 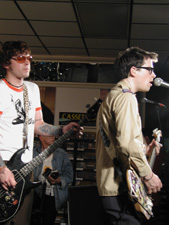 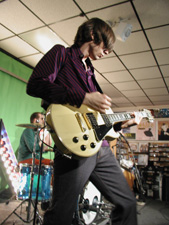 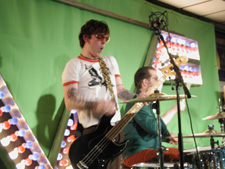 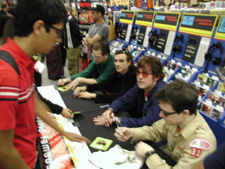 ....ok, your stories about the "Knock Down Camp Outs" have been pouring in. Theres way too many to even hope to post up. Everything from a 3 guy romp thru the countryside in a desperate all night attempt to find a store thats even open, to giant events with huge lines of wild fans. Thanks for these stories, the funny ones as well as the occasional bummer story. As it turns out, there were indeed camp-outs in all 50 states after all! Thanks to EVERYONE for so enthusiasticly showing your support! I've said it before, I'll say it again, it all starts with YOU! You have the band's humble gratitiude.

...Adrian Tomine, the renowned comic-book artist who designed the weezer "superhero girls" t-shirt/poster, has put his ORIGINAL art to that design up for sale. click here to check it out . This is a chance to own a very special one of a kind Tomine/Weezer collectible!

...well, yesterday, in good faith i posted the updated news about that Phoenix show, but it doesnt seem to go away. I get a lot of letters like the ones below, which seem to directly contradict what I was "officially" told the other day. Let me get this straight: I DON'T think the FANS are lying here! My revisions (5/11, in red) will stand for now, but I really wonder how much "truth" I've been told by people who might be trying to save their jobs on this.

"I have read all the new info on the Weezer show in Phoenix. The EDGE radio
station in phoenix did say that Weezer had promised a hour to a hour and a
half show. I tried winning tickets from them and was unable to get them. I
then called Rawhide who told me they were hoping to sell tickets at the door
but they had to get the o.k. from the EDGE. Needless to say they did sell
tickets and i did get to see the show. If I had known the band did not know
and they were totally against the ticket selling I would have been loyal and
not have gotten tickets. I am apologizing for the way the fans in Phoenix
acted at the show and I want to say the show was awesome and they totally
rocked the stage. Also I called the EDGE after the show, not knowing that it
was a promotion show and asked what the deal was with the band only playing 6
songs and they said "F*ck Weezer. They promised us a hour and a half show.
Thats just Weezer being rock stars. We'll never have them back again. They
totally screwed us on the p.a. and the setup." ---Tyler DeBord}}

"My name is Richard and I was fortunate enough to win tickets through the
edge's call in contest. I was reading on weezer.com that the edge had no
clue to the selling of tickets at the front, I find that impossible
considering one important fact. To get into rawhide you initially had to
show the ticket you won through the edge, then you had to walk a half a mile
inside this complex to a fenced off area where the show was being held.
Once you came to this place, you had to show your ticket again to get into
the doors. Oddly enough the edge people where at this second entrance
checking the tickets so there is no way they couldn't have gotten word or
seen what was going on. I still feel cheated by the edge and hope Rivers
and the guys have learned from this experience never to deal with the edge
again. They put on a kickass show dispite the edge being affiliated with it..."
--R. Daniels

...Is it me, or is something fishy going on? I tend to beleive fans like these here, they dont have anything to lose by telling me what the heard and saw....

...Harvard Camp Out rebuttal! I got quite a differing point of view on that "Sucked ass!" report from yesterday, i felt it was fair to post it...

"1) I know how to play every single Weezer song before the Green Album
(which I haven't had time yet to figure out, not that it would be hard),
including every b-side and many unreleased summer songs. And Alex, the
other guitarist, was more than competent as well. Sorry we didn't play
more than two or three songs. We were hampered by this musical disability
also known as "lack of time."

2) If you had any understanding of music, you would have understood what
we said: THE BLUE ALBUM (except "No One Else") AND PINKERTON AND MOST OF
THE B-SIDES HAVE NON-STANDARD TUNING, AND IT WOULD HAVE TAKEN US A FEW
MINUTES TO ADJUST OUR GUITARS. That's why it was useless to play along
with your cd.

3) No one "appreciated" your blasting the music. We can listen to Weezer
at home whenever we want to. But there is something more special about
singing along to guitars with other fans because there is a sense of
energy in creating the music yourself. Ideally I would have brought my
entire band so we could have sounded fuller, but that's not realistic.

4) What did you really expect? I'm a big Weezer fan and I was
disappointed in the turnout, but who really cares? I got my Weezer
cd, which is the real reason for going. But did you want Karl to rebuke
us for not accommodating you? We, the organizers, happen to be in the
middle of finals period, but we asked the rest of you for ideas and help
in planning. No one responded with much.

5) Sorry you didn't get a chance to look cool in front of the other Weezer
fans, but really, no one is impressed that you have "You Gave Your Love to
Me Softly." It's not exactly rare.