Toronto, the site of so many cold shows in the past, cane through with a perfect summer evening this time, and The Molson, already a nice place to go see a show, was used to its fullest advantage by 10,000+ peeps. This ampitheater is kinda cool in that they keep a front section of the floor open as a "GA" area, while all the surrounding seats are situated for maximun good views of the stage. Thumbs up.
Sparta couldnt make this show, so Toronto locals The Weekend filled in with style. Nothing wrong with the girls taking it to the stage! Their photo will be added to todays pictures soon. Meanwhile, after Dashboard finished their set, they raced over to the second stage to join AM Radio onstage for the end of their set! The small Second Stage was nearly overflowing with rock personnel.
Another satisfying set from the weez tonight, though Pat later reported feeling a bit ill, after perhaps having too much fun on the day off yesterday! But that didnt stop the rock.

...the first batch of Toronto fans' show reports that came in via email...

"...It's Shmedly, my mother calls me Ryan Maynes. I was born on February 10, 1973- I am an Aquarius. I started playing piano when I was three years old and writing songs at the age of five. I grew up in Huntington Beach and as a child my father would accompany me to local bars and I would stand in and jam with the bands. When I was thirteen I decided to give myself the nickname Shmedly because there were too many Ryan's around and I was tired of being confused with all of the rest of them. I went to the Los Angeles County Highschool of the Arts and played in the jazz band. My first year in school I discovered rock n' roll music when I began to play with all of the older students in school. Mainly I was playing lead guitar rocking out with my Eddie Van Halen guitar and immediately fell in love with the idea of becoming- well a rock star. I have played in various bands including Floor 13, Date with Dizzy, Holliston Stops, Northern Lights (Keyboards), The Ben Vaughn Desert Classic ( Bass, and Accordion). Right now I live in Pasadena, I am currently playing bass in the band Arlo (Subpop) we are on tour through early August. I have many musical influences. My favorite artists are ELO, The Beachboys, Beatles, Roy Wood, Sid Barrett, Robyn Hitchcock, The Move, Harry Nillson, Billy Joel, and Paul Williams. As far as my experiences playing with the band- it is an extreme privilage. I have been a fan over the years and it has been a pleasure and a great compliment to play with Weezer. They have been very welcoming to me making me feel at home. I am looking forward to expanding my musical creativity with them. I love all things Disney and Cindy from the Brady Bunch. My prize possession is a painting my grandfather replicated from my Heather Thomas pink bikini poster for me when I was in highschool, it hangs in my bedroom.
Thanks, Shmedly" 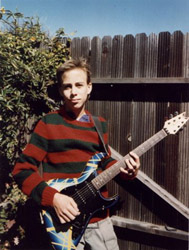