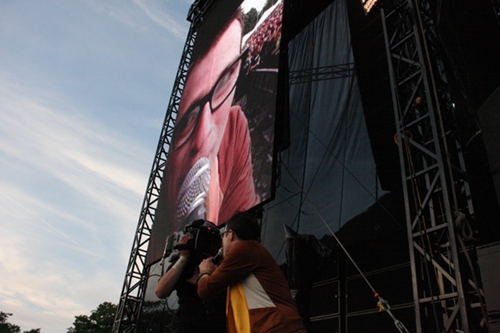 ...First time in Halifax for Weezer, and the city has shown itself to be a fine place to hang out, from the Shakespeare in the park to the record and book shops to the tasty grub. Halifax is the ancestral home of Canadian uber-alt-rockers Sloan, who were the band that Weezer's A+R guy Todd signed to DGC just prior to pursuing weezer. Their endorsement of Todd and DGC helped set weezer on the course that led to Weezer's original record deal being signed. We dont know if those guys even live here anymore, but it is a very cool town regardless.

About to hit up the Halifax Commons, where we will reunite with our '05 tourmates and St. Johns opener Hot Hot Heat, as well as encounter the mighty Black Eyed Peas who are headlining todays show.

The third in a trio of epic Canadian shows has gone down in the history books. Like St. John's the Halifax people were way overdue for a taste of weezer, and the feeling was mutual. The rock was massive and Rivers covered a lot of ground as a delighted crowd raged and smiled. It took a little doing to stoke up the seated section, but Rivers and the boys are becoming experts at pulling of the improbable and this evening's show was no exception. Watching weezer from the side for most of the show was The Black Eyed Peas, who said some very nice things about the weez during their own blistering set later on. Earlier Hot Hot Heat opened the show up, the third show they've been with us on this run. They are just as tight and cool as they were when they opened up a string of Foozer Tour dates back in '05.

A big Shout out to superfan Kyle M in attendance, who has remained dedicated to the weez thru thick and thin since the primordial pre weezer.com days. Good luck to Kyle and his band Cop Shades on their own Canadian tour coming up shortly. And a major shout out to @Surfivor2010 who has been devoted to the weez since the blue album came out, and never dreamed the day would come when Weezer would get to Halifax. With a few well timed tweets during the show, he found himself shaking hands with a stoked Rivers post show! Its super fun to connect up with the committed fans, both long term devotees and the newly minted members of the weez army.