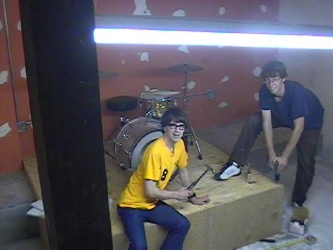 We have elected to throw caution to the wind and secretly defy the building inspector, by completing the long-stalled home studio in River's ex-garage. Above you can see Rivers and I completing construction of the drum riser platform (we had already tested it out at this point, as you can tell by the kit...). The plan now calls for getting the studio functional by mid-week and then having several days of band rehearsal to learn some new songs for the coming East coast tour.

...As you can tell, I once again have the ability to put new still pictures up. Next I tackle the thorny video clip challenge... with renewed resources!

...Today's question: "Do you like the Deftones?" A simple yes or no in your email subject header is sufficient, or feel free to comment. e-mail me here to cast your vote!

...The number one song that you voted to drop from the set was "Buddy Holly", which made Rivers sad, as he says its one of his favorite songs to play live. Hmmmm...