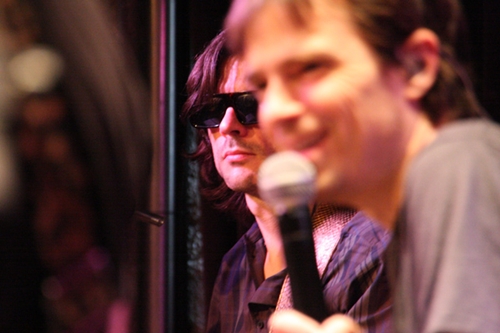 ...Today the band had another long day of intensive rehearsals, working on nailing their setlist down and all the details that go with it - how to transition between songs, learning some new songs, fixing little errors here and there that can creep in to older material over the years, etc. Of course, no one really knows how it will go down till the lights go down the evening of August 23rd in Toronto - but at least the guys will be as prepared as they can be!

Aaaaaaand Once again, folks, in case you are just tuning in:

...And the first single off the album is titled "(If you're wondering if I want you to) I want you to" and it comes out on August 25th!

...And here's another cool thing: on August 22nd in Toronto, the day before the 1st show of the tour, Rivers will be making a special appearance on the field in Athletes for Africa Charity Soccer Tournament!

Rivers is really excited to be playing in this match. He's played in the last 2 Mia Hamm and Nomar Garciaparra Celebrity Soccer Challenges in L.A. and this match promises to be just as fun. For this match, Rivers is a member of The Mystery Team, which also includes Ted Leo, of indie-punk band Ted Leo and the Pharmacists; Murray Foster, of folk-rock group Great Big Sea (and of Moxy Fruvous fame); freestyle soccer whiz Steve Elias and founder of Athletes for Africa, Adrian Bradbury. They join Broken Social Scene’s Brendan Canning, Bedouin Soundclash’s Eon Sinclair, former MuchMusic VJs Rick ‘The Temp’ Campanelli, Tony ‘Master-T’ Young, Sportsnet’s Martine Gaillard, The Score’s ‘Cabbie’ Richards and James Sharman, Toronto musician Dane Hartsell and many more, in the first-of-its-kind event, pitting celebs on the field against members of the public.