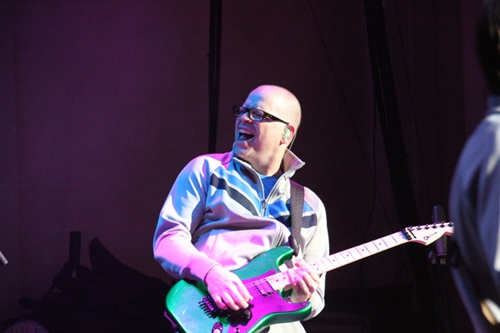 ...Into the wilds of New Jersey! Grandmaster Flash and The Furious Five did not rap about New Jersey, as that is where the Sugarhill Gang were from, and they felt wronged that a hastily assembled group of rappers got on wax first while the Furious Five, pioneers of rap, were left playng catch up ball at their own game. What all this has to do with tonight's show remains to be seen...

Today started with Pat and Josh heading over to the RXP Radio studios to do an interview with their ol' budrow Matt Pinfield. Good times and great oldies were had by all. Interview airs in the AM on 8/27.

Tonights show was free of the tech messes that made Jones Beach extra challenging, and the rock flowed freely at last. Energy! Power! Footballs! Socks! Only missing some crowdsurfing, but the seats went right up to the stage, so what's a mosher to do.