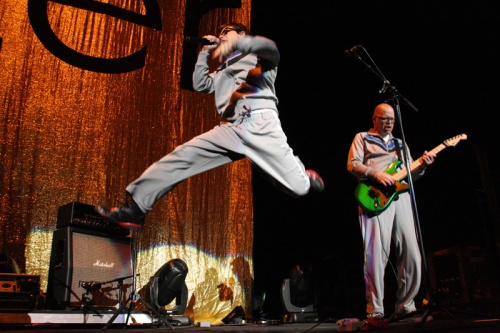 ...RADITUDE ALERT - keep an eye on aol.com in the coming days for the first look at the cover of the new Weezer album "Raditude", due out on 10/27! Hot off the presses!

...hey folks - after a long van ride to somewhere way the hell outside of Seattle, the White River Ampitheatre is now at hand. The time for resting is over. The time for rocking has arrived. I think this is the first show on the tour to take place on an Indian reservation. Although it pretty much looked and felt like most of the other ampitheatres on the tour so far. Well, there are very few large outdoor places to play in Seattle itself, so the children must trek out to the hinterlands for the Bleezer action. It's either here or an even longer drive out to the Gorge I suppose.

More crowd action than in Denver tonight, as the classic West coast vibe heats up. The Weezer machine is well oiled as we hit this last stretch of the tour, and its great to see and hear the guys sounding so fresh and so clean.