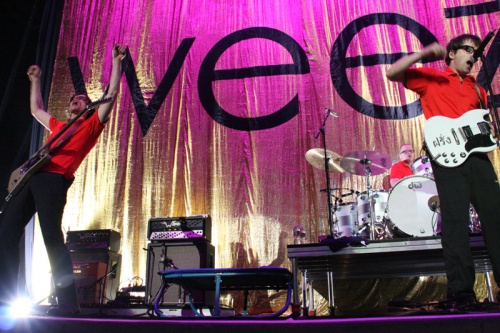 ...Back to San Diego, winner of the coveted Most Pleasant Climate (MPC) award in 9 out of the last 10 years. Tonight is a homecoming show for Blink who all reside in these here parts. Its been a real pleasure being on the Bleezer Tour, and this, the penultimate show of the team-up promises to be a corker. Corks will be corked. And it was cork-tastic! After Asher Roth's debut on the tour and another blistering Taking Back Sunday set, Weezer took the stage and a super high energy show was indeed had by all, with ukeleles and acoustic guitars biting the dust, giant fans being tossed around like toys, finger tapping supreme, and of course the trampoline of trouble. Rivers nearly did a faceplant at one point doing some of his random trampoline stunts, but he made it out basically unscathed due to his advanced tumbling training and jumped right back into the rock pool for more. It was more they wanted, and more they got But they wilted in the heat when weezer got hot. Then came the Blink homecoming show which was ttotally insane. Too much rock? Too much? No. There is no such thing. 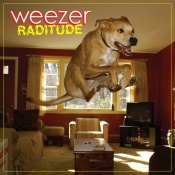 ...Reminder - Now here's a wicked Weezer cover experience you ought not miss if in the LA Area: Ryen and Jose from Ozma will be playing a show covering all of Weezer's 'Pinkerton' (and more) as "Across The Crabs - A Real Celebration of Pinkerton feat. members of OZMA & Teaneck".
Friday, Oct 02, 2009 8:30 PM PDT (8:00 PM Doors) at The Knitting Factory in Hollywood, CA - $10 advance tix here.

...Reminder - ok so this guy is doing his grad school thesis on Guitar Hero and RockBand. If you play these games, take a minute to take his survey! While Weezer has been featured in GH 3 & 5, and RB 1 & 2, you can be a player any version of either game or both to help out with the survey. By taking it, you could win one of the many prizes he's lined up, such as GH5, RB the Beatles, or gift cards to iTunes, Amazon, and MusiciansFriend.