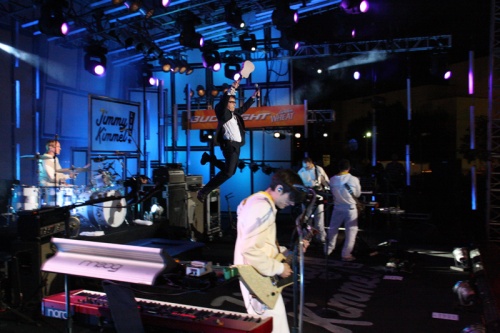 Remember to check out Weezer's NEW VIDEO for "(If you're wondering if I want you to), I want you to", exclusively on Babelgum.com!

...today in Hollywood CA, Weezer took the outdoor stage after the regular show's taping for a 5 song set, split between songs destined for airtime, and songs just for the kids in the parking lot to rock out to. The Weezer performance was taped today but will not air till sometime later, in November. We are waiting on the exact airdate.

The show that taped tonight (fyi) had Terry Bradshaw and Catherine Keener as guests, but Quentin Tarantino came down to the show to check out the weez, so in the spirit of doing the right thing, he escorted Catherine onto her show appearance and was a most welcome bonus guest at her side. The musical guest was Echo and the Bunnymen, who did their set indoors on the El Capitan's lobby stage down the hall from the Kimmel set. They were great.

But then came the additional musical guest, Weezer, outside in the back Kimmel parking lot on the big stage. The guys had prepared a special version of their current single "(If you're wondering if I want you to), I want you to", with Sara Bareilles doing a duet with Rivers as they traded off verses and harmonized on the rest. Sharp eyed fans may have noted an additional guitar player beyone Brian and Pat on stage for that song. That was Jim, who has been helping the guys get organized musically for the upcoming tour and in the meantime helping out here and there on guitar where needed. He is not a new band member, but in the upcoming shows he or other guitar players may guest on the occasional song depending on whats needed. All in the spirit of collaboration and mixing it up a bit.

The rock was handed down, with the fans in the parking lot as well as Quentin T. on the VIP couch soaking it in and having a ball. Next stop: The Hollywood Palladium, tomorrow night! And then to NYC!

...meanwhile heres some info on what happened yesterday, as the band taped their 3rd AOL Sessions with Sara Bareilles, Kenny G, and Chamillionaire! Dont miss the picture gallery! (these new AOL Sessions will be made available TBD)