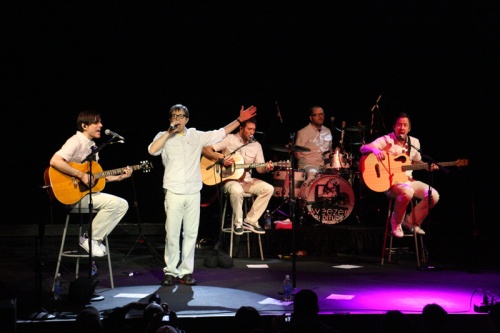 ...First off, many mysteries about the many variations of Raditude preorders are now clarified and organized here: http://www.weezer.com/raditude/

...Special Note to NYC fans who want to try to get into Letterman when weezer is there! the show tapings are/were MONDAY 10/26 and THURSDAY 10/29. the Monday taping will air Friday, while Thursday = Thursday. Ergo, no Weezer actually at Letterman on Friday.

...Well its been a hell of a busy week so far here in NYC! We flew into town Sunday, although Rivers came early Monday on a red eye due to filming a commercial in L.A. (youll see, soon enough). Monday we went to Letterman in the morning and the band rehearsed with Paul Schaefer and his gang. Then in the afternoon, we returned to the Ed Sullivan Theater to actually tape the show, which will air this coming Friday as the Haloween episode. Some good suprises in store for ya!

Then we went to a rehearsal space in midtown near the Hudson so the band and some special guests could rehearse the acoustic sets for the Sirius XM show on Tuesday, and the Stripped performance on Wednesday.

Tuesday (today) came and we went down to the Hard Rock Cafe in Times Square, for the Sirius XM "Artist Confidential" show which went out live to air on satellite radio. Rivers opened the set with a special cover of the Killers' "Human" with accompanying piano, cello and violin players as well as our MD Jim on lite touch drums. Then the rest of the band came out for the rest of the set of weezer songs. Inbetween the performances, the band was interviewed by the Siruis XM Artist Confidential host Lou Brutus, who asked the tough questions that people want to know about.

Then Rivers went down to the Fuse TV studio to tape a segment for their alternative show. Not sure when that airs but should be soon. Everything is happening all at once!

(click on any photo for a larger size version)