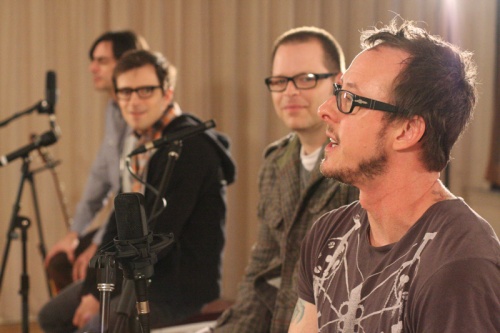 Today the band headed down to the Manhattan studios of Alloy.com to do an acoustic performance of "(If you're wondering if I want you to), I want you to" plus answer intrview questions in front of a small audience. It was a low key and pleasant affair that will appear on Teen.com in the coming days. Then Rivers went down to VH1's studios to do an interview that will be broadcast soon.

Raditude is nearly here! Its being released this coming TUESDAY 11/3! And be sure to check out YouTube's homepage that day for the Weezer Snuggie Infomercial premiere, as well as other cool Weezer video stuff!

And people - the Weezer Snuggie is now available when you pre-order Weezer's new album Raditude! All the info you need to choose the fan package that's right for you is on our Preorder page, which also serves as a handy guide to all the Raditude variations that are available. Dont miss the Weezer Snuggie, or the limited zebra striped Weezer Snuggie if you are feeling especially frisky! And the limited edition 100 page photo book filled with exclusive photos of the band at work and play and other crazy pix from tour and elsewhere, 50 photos of which were taken by me, Karl, the rest by another weezer insider with an all access pass and a huge camera: Daniel, AKA Dan The Man. Anyway, all these great weezer items and more are available via the Preorder page, check it out!

Nintendo presents the “First To Play” event at the Nintendo World Store in Rockefeller Plaza to celebrate the release of Band Hero™. At the event, everyone will be able to jam on the highly anticipated, new video game Band Hero available in stores on Tuesday, November 3. Fans will be able to shred on both the console and Band Hero for Nintendo DS™ Lite for a first time preview of the game!

The first 50 rockers in line will walk away with a copy of the game before it is even released! The event will also include a signing by Weezer lead singer Rivers Cuomo in addition to Band Hero giveaways throughout the day.

Here are 2 related articles about the event.

...Sonya Lee (the gifted pianist from the last few shows) is in an upcoming play in Manhattan. We've heard it's excellent, come check it out if you can!
"What Not to Say, and Other Disturbing Tales"
Starring Sonya Lee & Rachel Hardin!
Monday, November 2, 8 PM
@ ARS Nova Theatre
511 West 54th Street
Tickets $10

...Here's an Entertainment Weekly exclusive teaser video clip on the set of "Yo Gabba Gabba", the excellent kids TV show, where weezer recently spent the day filming a special segment dressed up in bug constumes, performing the track "All My Friends Are Insects"! It was a very cool day indeed, where we learned about important things like accepting others even if they are very small or otherwise different than ourselves.

...Magnet Magazine is asking what album are you most looking forward to next week, and they have a poll for you to express yourself here (hey, how about picking Weezer!)

...More photos from the iheartradio secret show here, by in house photog Kirill.

...All Alexa Chung audience spots have been taken, thank you to everyone who emailed back. To those who didnt get in, better luck next time, and to all, the performance will be on Mtv soon of course.

...Reminder: Go to AskWeezer.com and send Weezer your questions for the unique Twitter Interview to be conducted on 11/10!!!

...Check out the exclusive performance video from Tuesdays secret show on iheartradio.com!

(click on any image for a full size version)