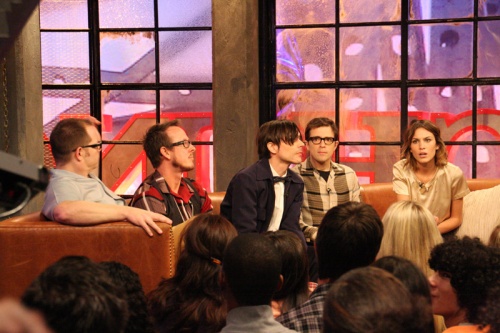 People check it out - Babelgum has created this online video editor mashup machine, built with video clips that i personally selected and supplied for them out of my archive of weez stuff. Use them to Mash-up your own Weezer video and you could win a day filming backstage with the band!

Yesterday (Sunday 11/1) was mostly a day of rest and recovery, except for Rivers, who made a special appearance at the Band Hero 'First To Play' event at the Nintendo World Store in Rockefeller Plaza to celebrate the release of Band Hero. Rivers signed autographs for fans of Band Hero and Weezer for an hour, as the Band Hero game was officially launched for anxious fans. Note that Rivers appears in the new Band Hero commercial that is launching 11/3, which also features Taylor Swift, Travis Barker, and Pete Wentz.

Today we headed down to Mtv Studios in a different part of Times Square to do the Alexa Chung show. Via our mailing list, 35 fans were picked to come attend this show, which some have likened to a 21st century TRL, only with fashonista Alexa at the helm, so a decidedly different vibe was in effect than in the old Carson Daley days. This is a live show, so there was a lot of hustling and "3,2,1.." type stuff going on from the behind the scenes people. Lots of hurrying up and here comes the cameras. After a guy from the new "V" TV show was interviewed and some sort of recurring Lady Gaga lookalike contest was underway, it turned to Weezer at last. The guys performed their new single "I Want You To" with their buddies Alex Greenwald of Phantom Planet and Nat Wolff of the Naked Brothers Band helping out on guitars. Leighton Meester was originally going to appear in the duet with Rivers as she had at Hammerstien, but was unable to make it in time so Rivers handled the whole thing himself. As Josh Freese was already back in L.A. for some Devo duty (now for the future), Pat handled the drums, and with the guys in their 50's video outfits, it looked a lot like the video. They sounded excellent as well, it was a good sounding small studio room. See the performance here on Mtv.com.