Hey Guys! Today, you can listen to and buy the new Weezer album, "Raditude" for only $3.99 on MySpace Music through Amazon MP3. Click the image below to get it now! 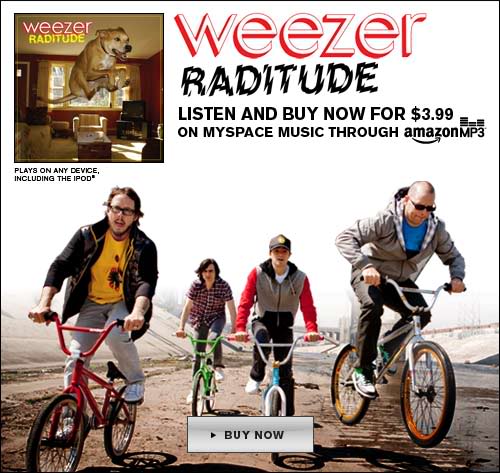 ...Dave Dederer, formerly leader of the Presidents Of The USA has written a nice blog post about Weezer on nuTsie.com. Thanks Dave!

...special note to people who preordered the vinyl LP of Raditude - some of you may have noticed that the download code card is missing from some copies. Never fear, a solution is being worked out, details to follow.

The Weezer Snuggie Infomercial, exclusively on YouTube. (And dont miss the 'making of' video too, shot and edited by me, Karl, on the Surreal Surburban Snuggie Set).

...its never too late to order the iTunes Pass super deluxe version of Raditude and get over 30 songs and video pieces, many of which are ONLY available via the Pass!

...Babelgum's got the official video for "I Want You To" with Odette Yustman right here!

...Babelgum has created this online video editor mashup machine, built with video clips that i personally selected and supplied for them out of my archive of weez stuff. Use them to Mash-up your own Weezer video and you could win a day filming backstage with the band!

...exclusively on YouTube, dont miss yet ANOTHER great performance of "I Want You To", the acoustic jamb version - again with Sarah Bareilles!

...Watch Weezer on MTV's It's On With Alexa Chung with guest performance from Alex Greenwald of Phantom Planet and Nat from the Naked Brothers Band! He also performed with Weezer in NYC on Halloween when another new friend Leighton Meester popped by to sing "I Want You To" with Weezer.

...Myspace has videos up from the recent SF secret show here!

...Dying to see Weezer live? New tour dates are up now and you can head to T-Mobile's Facebook page to win a Weezer concert at your favorite college - right now FSU is in the lead, and just like college football, votes matter - get yours in now!

...While they were in NYC Weezer also stopped by Clear Channel to record a performance for Stripped - watch for it soon along with Sirius and Fuse appearances. The Stripped performance will also air on iheartradio's Radio Weezer station.

...Watch the encore of Weezer's virtual concert on Planet Cazmo!

...Don't forget to Go to AskWeezer.com and send Weezer your questions for the unique Twitter Interview to be conducted on 11/10!

...Don't miss these SoCal chances to mee the band and get your new cd (or item of your choice) signed by them!