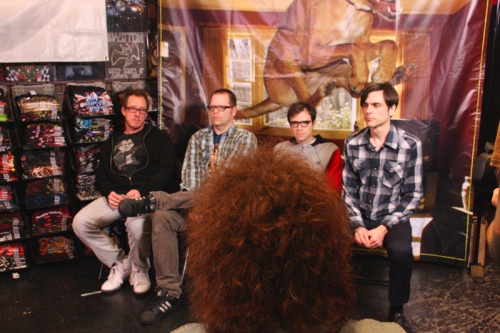 This evening as the first of 3 SoCal area instore singing sessions with Weezer, as we welcome their 7th album "Raditude" into the world. Today's signing was at the Hot Topic store in the Hollywood and Highland Mall, next door to the Kodak Theater and the Knitting Factory. There was a huge turn out, but Hot Topic was careful to set limits so that everyone in line could say hi to the band and get their item signed in the time alotted. Prior to the signing, the guys did an interview with a video crew from HotTopic.com, in which the new album was discussed as well as some rather goofy stuff.

Basically everything went really well, and a lot of people walked away with everything from copies of Raditude, to guitars, to old ticket stubs, to bizarre demonic wall plaques, to strange pictures, to t-shirts, to broken ukeleles, to intact ukeleles, and everything in beween signed by the band. If you can make it into the signings in Irvine tomorrow or Chino on Saturday, dont miss out! Here's the details: