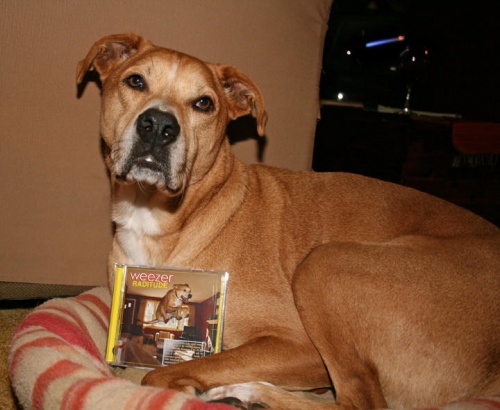 Today the guys went down to Tilly's in Irvine, CA for the second of their 3 SoCal signing appearances. By any measure the crowd that showed up was massive! But they all got what they came for. Tomorrow, its on to good ol' Chino!

**update - here's a story on the signing from the Orange County Register.

...Sidney the Raditude Cover star pooch hasn't let fame go to his furry head. Today's pic shows him lounging with the cd that bears his photo, which was taken by his owner Jason Neely, originally for a National Geographic contest which he won.

Here's some thoughts on Sidney from Jason:

"Exuberant, thoughtful, manic, playful, and very, very quirky—all words that describe my dog, Sidney’s personality. One word encompasses all of them—not a word that I had heard before mid-August — that word is Raditude.

When I called my friend Jim to tell him that Weezer wanted to use the picture that I took of Sidney leaping through my living room for the cover of their newest album, he asked what the name of the album would be. I told him “Raditude.” There was a moment of silence on the line. Then laughter. He said he couldn’t think of a better word to describe Sidney.

From the time Sidney’s picture was published in the August 2009 issue of National Geographic, I’ve been getting emails from people sharing pictures of their dogs that look like Sidney. I’ve also had countless people ask what kind of dog Sidney is. Sidney is a rescue dog. Other than knowing that his mother was a Lab mix, we don’t have any clue what breeds are in him. His mother was pregnant and due to be put down. A couple of girls in Gainesville, FL took her home and raised the pups until they were old enough to be adopted. That's when we brought the crazy dog into our lives.

I think that the appeal of the photo I took of Sidney is two-fold. First, it captures his essential Raditudeness. The focused intensity of his leap freezes that moment of a transcendental high that everyone experiences in life—always in all too fleeting moments. The second part of the picture’s appeal is that Sidney could be any dog. He’s not a pure breed. He’s not a show dog. There are a lot of dogs that look like him, and because of that we can all relate to him. But, like many of us, Sidney is one unique guy. And he loves to show it." -Jason

Note that Mtv news will be running a piece on Sidney soon - you'll be able to see him in action!

...Buyers of the iTunes Pass version of Raditude: You may have noticed by now that for some reason iTunes Pass does not allow for a digital booklet. So we have provided one for you, in PDF format, on this page.

...Here's a review of Raditude from the perspective of the longtime Weezer fan. Justin Hoenke was into Weezer when many of you might not have even heard of them, so he has been through a lot of changes as weezer has thrown out its curve balls. He's got faith in weez as well as a critical eye, and his p.o.v. is interesting.