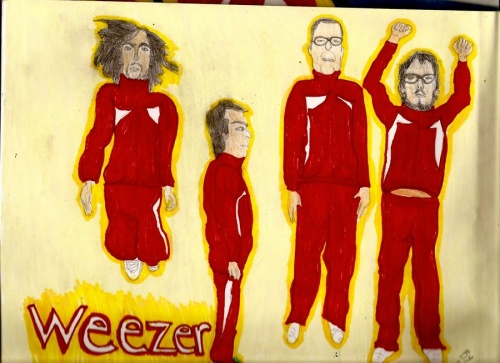 ...people, new bits of info keep flowing in, so without further ado...

...The worlds first(?) Twitterview is happening today, with Weezer. Don't forget to go to AskWeezer.com now and send Weezer your questions for the unique Twitter Interview to be conducted tomorrow. The interview will unfold before your very eyes on Weezer's twitter and askweezer.com.

...It's like Marvel Team-Up, only with Weezer and Kenny G instead of Spider-Man and the Human Torch. Could this really happen, or will it be like Marvel's "What If?" stories?

...Rivers Cuomo and Jermaine Dupri at their photo shoot for Billboard mag talk about their mutual admiration and the "Can't Stop Partying" that came from it. Billboard mag featuring RC + JD on the cover comes out soon!

...Reminder - on Monday, KROQ Los Angeles announced the first known date of the January leg of the Raditude Tour - January 11 at the UCI Bren Events Center! Tickets go on sale 11/14 at 10am on Ticketmaster. And YES THERE WILL BE A PRESALE on Friday 11/13 10AM-10PM, and weezer and kroq.com will hook you up with the password TODAY, if you are on our and/or their mailing list!

Meanwhile the December Raditude dates are on sale now!

...special note to people who preordered a fan pack (Raditude + snuggie or variations therof) - due to a huge snuggie demand, this has led to a small delay in shipping some orders. Apologies if you have not received your package yet, the backlog will be caught up with in the next few days. And for people who are ordering the package with the photobook - its in production, its gonna be ULTRA-cool, thank you for your patience, you are gonna love it!

...Weezer will be featured on an upcoming Carson Daly show (performance and interviews taped at the recent Hollywood Palladium show), but we havent heard which episode yet.