...this impressive ovoid arena was possibly the largest place on the tour so far, and was packed to capacity with over 12,000 wild SoCal fans. Backstage, things were hoppin with a rediculous amount of guests tripping over one another, including our buddy Darren (see photo) and none other than Tony Hawk, who was surrounded at all times by a cloud of lil' skate rats, like the X-treme pied piper. Sadly, the proliferation of the happy skate children made opportunities to hang with the birdman scarce, so no 'photo ops', sorry. Onstage the rock was again brought to life, though I heard that the 'D' didnt consider this one of their best shows (I disagree). The weez let it fly again, and Pat was heard to say that this was his personal most fun show of the tour so far. Pre show, I shot more footage for a top secret video project which is coming along nicely so far. More on that later... 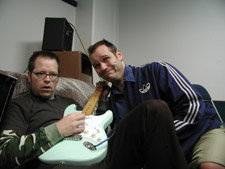 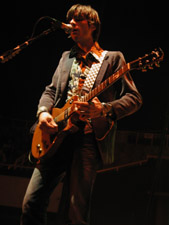 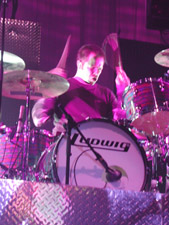 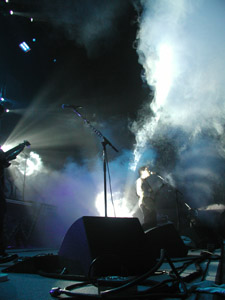 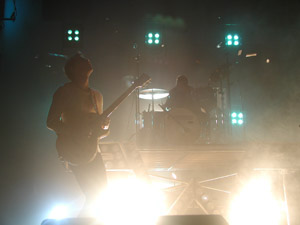 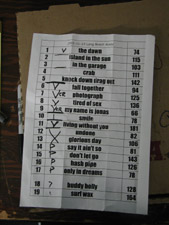 "i just came from the show in the LBC (i think i was standing behind you or
someone who looks JUST like you) and it was completely AMAZING!!!! i
thought it would have nothing on the goat punishment shows i saw at the
viper room, but the guys totally filled in those 'rock star shoes' and put
on a great show!! i would just look up at them on stage, and they looked
like gods! it was so crazy to see them rockin out in the tiny viper room,
and then OWNING the entire long beach arena. they kicked so much ass, and i
was completely enchanted by 'only in dreams'." --K

"I just got back from the Long Beach show and it was
amazing! This was my sixth major concert of the year
and by far the best. Jimmy Eat World was magnificent
and I was so happy when they played "The Middle". The
D managed to make everyone laugh a lot. Finally,
Weezer. They were so great. They played "Smile"
which is one of my favorites and i was so surprised.
Everyone was singing along to all the songs but the
new ones. At some points, Rivers' voice was pretty
faint due to the mass amount of fans singing along.
"Only in dreams" was so beautifully done. At one
point, when things got quiet, i yelled out "take my
virginity", i was pretty close so i don't know if i
was heard or not, but a lot of people were laughing
and Rivers commented, but i couldn't hear what he
said. Thanks for the great experience." --Roxy

" I must say that tonight at the Long Beach Arena has got to be one of
my favorite rock concerts--probably the best one yet! Despite all the
pushing, shoving, stomping, kicking, elbowing, poking, touching, smoking,
drinking, spitting--*gasp* and almost dying in the crowd, i had a load of
fun! Jimmy Eat World's performance was awesome! On the contrary, Tenacious D
was just repulsive... Two talentless baboons who cursed a lot and made dumb
jokes...they were just HORRIBLE! Luckily for them, once Weezer stepped in
all was forgotten. =]WEEZER KICKED MAJOR ASS! Hearing the "old school" songs
definitely made my day.I was just elated at at the performance. Much thanks
Weezer for an awesome show and the greatest memory." --Dan

"This was a Weezer filled week for me! It started out with the long awaited San Diego show. It was so incredibly awesome that we bought tickets for Long Beach. So I got to be excited all week anticipating Friday night. What really surprised me is that even though both shows were basically the same, each experience was different. In San Diego we had really good seats in the middle of the arena. The lights and visual effects were great and the band just blew me away. In Long Beach, our seats were way over on the side, by Brian. But this time was just as cool because it felt like we almost had a "backstage" view of everything. We were really close to Brian and he waved at us, and we also got to see Jack Black when he left the stage. During Surf Wax everyone knew that it was the last song, so we all got up and danced by the railing. It was great! I just want to thank the guys for putting on such great shows for us. We love you!" --S

"Well, I just got back from the Long Beach Show, and I thought I'd write
to tell you of how I thought the show was...well, to put it plainy,
incredible...from the opening strains of the always fabulous Jimmy Eat
World, to the fact that I ALONE cheered for The Greatest Song in the World
Tribute, and finally to the sea of weezer symbol hands...everything was
absolutely phenomenal. I got tickets on the internet presale...and then I
had to ebay two more because I needed some for more friends, but it was
worth it. I'd never seen them before, and I relearned why I love that band
so much as I heard them live. Weezer makes things right in the world. Rivers
got a rare improv moment as a guitar problem had to be fixed...it's funny
with him being so introverted (from what I heard) Everything about that
night is great. Every tune, every word from the lyrics...I just wished
people got more excited at the songs that weren't on the CDs (My girlfriend
and I were the only ones who got excited when I song we'd never heard came
up...thanks Rivers for announcing the names of the songs...it really helps)
I finally got In the Garage, because I have this job selling twelve sided
dies, and Dungeons and Dragons, and all that song is a tribute to the guys
who buy it...it's great when everything clicks like that. But anyhoo, the
entire show was amazing, and although we weren't too close on the floor, we
were chanting "three more songs" (only pussies cry for one more song) until
the house lights came up..." --Kevin

"well, i just got home form the long beach concert. sadly....i didn't have as much fun as i thought i would have. i mean, the bands were awesome. JEW and TD were great. and weezer was amazing. finally getting seeing them play from the pit made me want to cry. but my concert experience was ruined by my fellow concert go-ers. it shocked and abhored me to experience the rudeness of my fellow weezer fans. all they cared about was pushing everyone they could to get to the front. i'm already short for being 17 (5'0), but everybody took it upon themselves to trample me. i could only last until the end of "in the garage" before i felt myself wanting to pass out. i was suffocating and nobody paid no mind. it took a good 5 minutes before i could get out. i was like 1 foot away from rivers for about 1 minute until the security guards made me walk to the end of the pit. i was so sad that i had missed my chance of experincing the music practically face to face with rivers. i had to watch from the side of the pit. i was so sad. i cried for a little. i felt stupid for not being able to take the heat. and to make matter worse, someone stole my tour shirt. *sniff* ...if it had been anybody else on stage, i would've never of stayed in the pit as long as i did. their music is the only thing that made my s----y night better..." --Katie

"Weezer put on a SHOW... I was kinda just nodding my head a little bit... then they played "Tired of Sex" and I lost
all control of my body through out the rest of the show. The funniest thing though. Some guys next to me pointed at some guy sitting in front of me... it was Bob Saget! That guy that hosted America's Funniest Home Videos and Full House. He was there with his kids. Folks, you haven't lived till you see Bob Saget headbanging to "Tired of Sex". Awesome show guys, can't wait for the new album." --Ryan

" I was at last night's Long Beach show.I'm all
black and bruised right now,but it was worth
it!Normaly,I'm a very quiet and nice asian girl,but
yesterday...I unleashed something.Before I knew it...I
somehow got to the very front of the
barricades.Getting there involved throwing a midget.=D
No one was going to stand in my way from the =w=,not
even the little "wee man" from Jackass.I was
thouroughly hated,heehee.I also found out that
security will be extra nice to you and let you
stand(when everyone else is forced to sit)if you tell
them you have a wooden leg.They even gave me first
dibs on water.=D I saw you filming the guys and called
your name,but you didn't hear.I was unluckily next to
2 f-----s who kept screaming to play THE GOOD LIFE.I
almost went deaf and they were soooo disrespectful to
Rivers so I had to do something.;) I yelled at them
and smacked them and that shut them up for a good
while.They couldn't do anything back since I'm a
girl.Muahahahahaaha!I must go now and reminece." --Jessica