...things were a good deal quieter backstage today, here in mellow Phoenix. However this did not prevent Rock God Alice Cooper (who apparently runs a theme restaurant across the street from the America West Arena) from finding his way back and saying hello and granting his sinister blessing on the proceedings. Also Jack and KG turned the ol' dressing room prank nozzle up a notch today. This kinda stuff is sure to make our next video clip highlight reel for you. Meanwhile: Rock? Delivered. This is Jimmy Eat World's hometown and they had a lot of 'locals' to sing to. The "D" dabbled with some 'System of a D' stylings. Weezer let fly another salvo of the good stuff. The Phonecians (I always wanted to use that term in real life) were stoked from what I could see. (And they thought weezer wouldnt come back after the Hooptie Tour 'Rawhide' disaster. O, ye of little faith!) 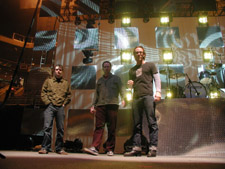 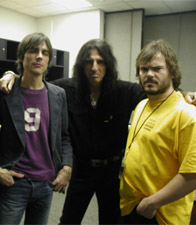 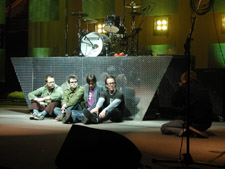 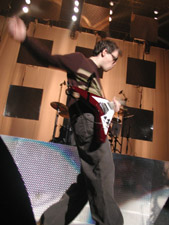 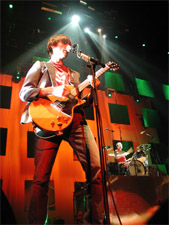 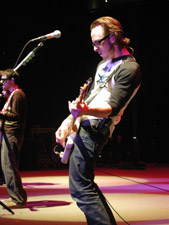 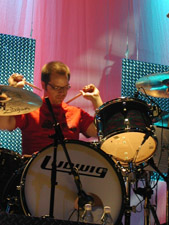 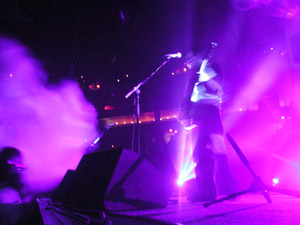 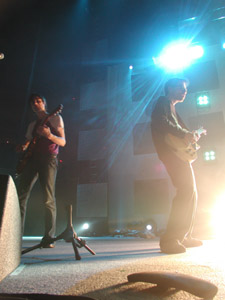 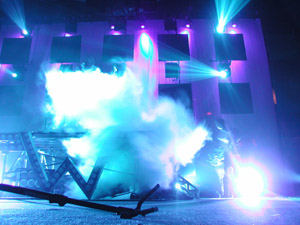 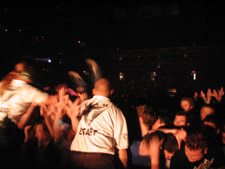 "I can hardly describe in words the inherent awesomeness of Weezer (and Jimmy Eat World). The entire time I kept saying to myself "I can't believe I'm actually at a Weezer concert." I was so into it . . . complete with the head banging and singing along. That's big for me, since I'm usually such a calm person. It was all so good (except for the fact that I'm way too damn short and can't see over people's heads very well); the lighting and the effects were great. Some bands become notorious for sucking when they play live. Weezer just all out rocked America West. Sadly, it ended. A concert just isn't worth it if my voice isn't a barely audible hoarse whisper and my ears aren't half-deaf and ringing at the end. Weezer was worth it." --Shirley

"Overall, tonight was a fantastic concert experience, with all three bands
rocking the house quite nicely. Jimmy Eat World was really great, despite the
fact that I had to spend most of the time protecting the girl I went with from
falling crowd surfers, and I'm sure it was cool for them to be playing so close
to their hometown of Mesa -- the guitarist even said, "I came to see Megadeth
here once!" They played pretty much all of the songs from Bleed American that
I wanted to hear and some older songs that were very cool, too. I expected
Tenacious D to be funny, which they were, but I was also pleasantly surprised
by how talented they were at the singing and guitar-playing aspects of their
show. A few people in the stands were booing and yelling, "Get off the
stage!", which I found to be distracting and rather unneccessary. If you don't
like an opening band, you can go look at T-shirts or something during their
set. Anyway, when it came time for the Weezer set to start, a couple of my
friends and I tried to fight our way to the front, but it was pretty hard to
get through, as I imagine everyone else wanted to be up front too. I was able
to get to the middle of the stage about ten rows back by the fourth or fifth
song, but I got separated from my friends. Not a big deal, though, since
pretty much everyone was rocking out and having a great time. I only stayed up
that close through My Name Is Jonas, because I was starting to have trouble
breathing in such crowded conditions, and a couple of times my vision started
to fade, so I backed off to a more comfortable distance. The new songs all
sounded awesome, especially Fall Together and Living Without You, and the
lights and confetti during Only In Dreams were a perfect way to end the main
set. I guess the one disappointing aspect was hearing people calling for El
Scorcho and Pink Triangle, and knowing that there was no way Rivers was going
to play either of them. It would have been nice to hear more off Pinkerton or
some b-sides like Suzanne or You Gave Your Love To Me Softly, but oh, well. A
splendid show nonetheless." --Justin

"Holy crap last night's show kicked! My three favorite
live bands all together under one roof! Me and my
friends managed to sneak down to the front row when
everyone started rushing the stage, and the view was
most excellent. JEW was amazing, but only a half an
hour? Come on! The D rocked our socks, and the girls I
brought with me were laughing but blushing bright red
by the time they got to "**** Her Gently". We actually
met Kyle Gass on the street after the show, which was
tre' cool. And of course, the weez. . .what more needs
to be said? "The Dawn" was an awesome opener. The new
material was great, and it was cool to hear some
Pinkerton live. The Surf Wax freak-out was insane." --Kyle

"My glorious day started off walking around downtown Phoenix. At about
noon my brother and I saw a silver tour bus outside of the Hyatt and had
nothing better to do than wait. We ended up talking to four people from
Phoenix Jen, Tawny, Evan and Eric. A friendly but spirited game of Uno
commenced. Just as someone was about to throw down a "wild draw four" Brian
Bell snuck up on us and said "I thought so" He was really cool and talked to
us for a little while. A few minutes later Scott brought his base down to
the bus. Scott came over to talk with us for a while and told us that "Uno
is hot." Eventually we went into the Hyatt lobby in hopes of seeing Pat or
Rivers. Through the lobby window we noticed Pat get out of a private car and
check in with the bus driver. We ran out of the lobby just as Pat pulled
away in the mysterious car but, seeing our waves he flashed us a metal sign.
Of course Ninja Rivers was nowhere to be seen. The concert was great all 3
acts were tremendous. The D were in full effect. And Jimmy Eat World was
just as amazing as the first time I saw them in St. Louis and received a
great homecoming. And Weezer owned America West Arena. I even saw Karl with
two cameras taping. One of the best shows ever." --Jeremy

"Despite the fact that the hard ass security guards wouldnt let us do
anything and I happened to sit next to some major chain smokers this concert
was the best I have ever been to. Jimmy Eat World was really good and seem
well prepared. 'D was awsome and both of the opening bands seemed pretty
happy. But Weezer looked miserable. Well Rivers did. Concidering that lots
of the people were there because they heard Hashpipe on MTV I would be
depressed too. Too many people trying to be trendy. I ran into a chick I knew
in the bathroom who claimed to be the biggest weezer fan. I said to her
"Damn Brians sexy, huh?" she cocked her head and asked "Who is Brian?" She
also thinks pinkerton is a town in ohio . . . So if he was depressed because
of stuff like that then I understand. or maybe he is just tired. i dunno but
he looked like he wanted out. I think he said at one point "We appreciate
your unwavering support" it sounded insincere and planned. but they played
well and barely hit any sour notes. In the middle of Buddy Holly I grabbed
my cell phone and called my sick boyfriend and held it up so he could hear
how intense it was. As a die hard 15 year old fan i would like to rivers to
rember, f-- rollingstone, f-- mtv, f-- the bandwagon, be true to urself, never
get your own doll, never sell out. because its about the music not about the
people." --alexa