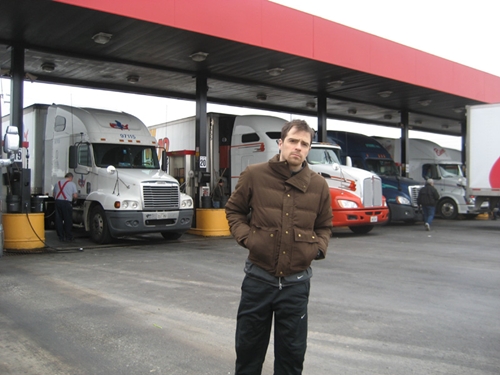 ...Well here we are deep in the USA, on a 48 hour bus ride from Albany NY to L.A. We started rolling shortly after Rivers' discharge from Albany Medical Center at about 10 AM Friday, first heading down to JFK airport in New York to drop off Rivers wife, daughter and their nanny for their flight out West - the one Rivers could not take due to his healing lung. Once they were in the terminal, off we went, cruising down the I-95 into D.C. where we picked up the 81. That led us down the backbone of Virginia to Tennessee, where we got on the I-40 Westward. From there its been a straight shot to Texas, where we cut down diagonally on the 30 to the 20 to the 10, which will take us directly to L.A. by Sunday midday sometime.

The journey has been pretty much non stop so far except for when we stop at truckstops to re-fuel and switch up drivers. By taking a southerly route we've avoided bad weather, though its been pretty cold even down South! The time has gone by fast, taken up by a healthy schedule full of knitting, Mad Men DVDs, meditation, medication, naps, Amy's Organic frozen entrees, ice cream sandwiches, measuring lung power with the Airlife exhale-o-meter device, book reading (Ray Charles' autobiography "Ray" and "Appetite For Self Destruction", a book about the state of the music industry), writing thank you emails (thank you to everyone by the way for your kind words of support!), and doing computer work, planning, researching and etc - sowing the seeds of Rivers' and weezer's next musical explorations. Onward!

...another take on the mystery of Rivers' sprained ankle: Fan Dave Robinson was at the Toronto show which preceeded the bus crash and saw this: "During one of the songs post Island In The Sun (I do not recall which one exactly) Rivers was attacking Scott with the larger beach balls and bouncing back off of him. Both my sister and I were watching the antics and laughing heartily along side everyone else but then we both caught Rivers moving towards another beach ball to give it a kick and launch it back into the crowd. While doing so his right ankle appeared to roll on something on stage that the beach ball was probably obstucting his view from. Rivers winced a little, lifting his leg for a second before moving on and kicking the ball and continuing to sing along with the song..."

...Note that while nothing has been made official yet, it looks like most of the January weezer shows will also have to be rescheduled to give Rivers the full time the docs say he shouldn't be jumping around. We'll have the info on weezer.com asap!

...Check out this new video from the 12/5 Chicago show, courtesy of the Chigaco Blackhawks! Keep an eye on their website, they will soon be auctioning off the Blackhawks jerseys that the band wore and autographed that night!

...Fan Jeffrey Watts wrote and recorded a song about Rivers' bus crash and posted it on Youtube. It's a nice gesture.