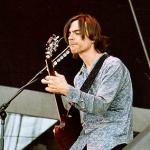 Brian Bell at the Southside Festival.

Weezer fans had to hold out several years to see their favorite band returning to German festival grounds. The Southside Festival was the place where LAUT was champing at the bit to do an interview with the guys.

Neuhausen ob Eck – As the arranged talk before the gig was cancelled Weezer thrilled a great number of fans on the Southside first (that partially weren’t waiting for someone else). After the gig it was still burning hot in Neuhausens old airport area but Weezer guitarist Brian Bell was answering our questions while he was strolling in front of the tour bus. He couldn’t hide that he would prefer to bail out into the bus though.

LAUT.de: Your new album immediately hit the charts. Are you satisfied with the reaction of the fans to the new album? Did you expect it going so well?

Brian: Well, you never know what to expect in the music business. But everything is going positively, the album sales already exceeded our expectations and the German audience seems to like it. Of course, I initially asked myself if they would like it. It seemed like the Germans prefer heavier music but maybe that is just a prejudice.

LAUT.de: Why did you cancel your concert dates in August for Germany and Europe then?

Brian: I don’t know anything about that.

LAUT.de: Will you come back to Europe for touring?

Brian: Sure. It’s safe to say that we’ll be coming back.

LAUT.de: Are there already plans for when that’s going to happen?

Brian: No, there are many things to decide first but I hope it will happen before it gets really cold.

LAUT.de: I always wondered why there are always 10 songs on your albums…

Brian: Maybe it’s because we think ten is the perfect even number. The decimal system is built upon the number 10.

LAUT.de: Some people can’t understand why there is such hype around an album that is just 28 minutes long. Some were a little upset about that.

Brian: Yes, that is reasonable. But I think quality is more important than quantity.

LAUT.de: Why was there such a long break between the last album and the new one?

Brian: Well, there is no good answer for that. That’s just how it happened and we took a long time off.

LAUT.de: Matt Sharp was in the band from the beginning and then he quit and formed The Rentals. Is there contact between Weezer and The Rentals, maybe even something like friendship?

Brian: There are no bitter feelings regarding this topic but there is no contact with him either. At least Matt has my number in case he wants to call me.

LAUT.de: Maybe this is a quite personal question but do you know where Rivers’ fascination with Japan and Japanese girls comes from?

Brian: Well, the human sexuality is pretty complicated, so no, I have no idea.

LAUT.de: Why are Weezer so popular in Japan?

Brian: Maybe it has something to do with his Japanese girlfriend.

LAUT.de: What music do you personally listen to, for example on the tour bus?

Brian: There is nothing that we all like so we don’t listen to music on the tour bus. Everyone listens to his own music with headphones because you need your own space when you’re on tour. Right now I can’t really say but in the past it probably would have been Curtis Mayfield.

LAUT.de: What bands would you call an influence?

Brian: I bought my guitar because of Led Zeppelin…

LAUT.de: …you started as some kind of metal band, at least Rivers did…

Brian: …that was just Rivers. I had never played in a band until 1990. Then I joined one and we were making alternative stuff, like the Pixies.

LAUT.de: A lot of bands like The Deftones or Ash are playing Weezer covers these days. What do you think about that? Are you proud about it?

Brian: Yes, totally. It’s needless to say that it’s flattering. And it’s a great opportunity for these songs that are almost 8 years old to live on in other bands. We rarely play those songs anymore. Though we like them we just can’t play them every night. It’s just pretty flattering.

Brian: I’m sure that it’s a good idea. I think everything that makes people read is a good idea. If people don’t read newspapers anymore I think they should at least read on their computer. I think it’s a great idea and I’m sure it can work.

LAUT.de: The next question is about Napster, of course. What do you and what does the band think about it? Is it a good way to bring music from one end of the world to the other to become better known?

Brian: It’s a double-sided sword with Napster. It is great because people can listen to songs that they wouldn’t have heard otherwise. But it’s a bit annoying when an album is heard before its release date. It takes the fun away. That’s like opening your presents before Christmas. In our case it’s like this: whenever we play a new song – and we do that pretty often – it appears on Napster the next day.

LAUT.de: The media often compares you with the Beach Boys, as the Beach Boys of the 90s, the way that you play etc. Do you like these comparisons or is it something that sounds weird to you?

Brian: I think that’s a cool comparison. Much better than “geek”-rock. I like it.

LAUT.de: What do you think about this whole nu metal scene?

LAUT.de: Are there any side projects of the Weezer members?

Brian: Yes, I have a band called Space Twins. I hope there will be an album this year. Pat has a band called The Special Goodness. I think you can get their records from their website. [Pat walks by in the background, grinning and giving a thumb up.]

LAUT.de: On stage Rivers said a few things in German…

Brian: …yes, his father lives in Germany. He [Rivers] spent some time here…

LAUT.de: …is his father German?

LAUT.de: Today you played a few new songs. Can we expect a new album from you soon?

Brian: Yes, we played a few new songs today and the new album, yes, maybe it will come out pretty soon.

German to English translation by Donny.