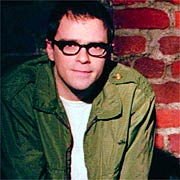 If you think Weezer's days are numbered just because frontman Rivers Cuomo is ensconced in collaborative projects and two of his bandmates have formed groups of their own, maybe you've become paranoid from too many "Hash Pipe" hits.

Not only are Weezer still going strong, they plan to hit the studio soon, Cuomo said recently from his Los Angeles home. The songs won't be new — some will be covers, others will be previously released Weezer tracks — but Cuomo hopes to record them in ways that will breathe new life into the band.

"We might do them acoustically or with an orchestra," he said. "I'm thinking about something like 'Slave' or 'December' from Maladroit and maybe some old songs. I see us doing heavy versions of emotional songs."

"I've been playing something called the 'End of the World,' by [underground '60s pop-country songwriter] Skeeter Davis, and 'Without You,' which was popularized by Harry Nilsson," he said. "I'm really into super emotional ballad-type songs right now."

It might be tempting to think Cuomo is being different just to be ironic, but he insisted he doesn't even think along those lines. "I just know I really like what we play."

When it comes to Cuomo, you can't assume anything. He'll praise singer/songwriter Ben Kweller one minute, then plug Metallica the next. And while he seems to have moved on to mellow, emotionally resonant songs, he continues to jam with heavy metal bands. He even co-wrote "Stupid Girls," the first single from the next Cold album.

"There wasn't a lot of thought put into it," he said. "[Cold singer] Scooter approached me and said, 'Hey, you wanna write a song together?' so we did it, and if Neil Diamond came to me tomorrow and asked, I'd probably do that too. It doesn't consciously imply that I'm trying to shift in a certain direction."

Cuomo described "Stupid Girls" as a natural blend of Cold and Weezer. He originally planned to sing the first verse of the track, but he changed his mind after Scooter recorded his own vocal part.

"It became painfully apparent that his voice is way better than mine," Cuomo said. "So I just asked him to re-sing my part."

Cuomo also wrote lyrics and sang on a track called "I Suck" for the upcoming debut record by DJ Mark Ronson.

"I wasn't familiar with him," Cuomo admitted. "They just asked me, and the label sent me the track. I listened to it and immediately the tune popped into my head. It's about a girl at a club who didn't want anything to do with me."

On top of all the musical collaborations, Cuomo is managing his friend Kevin Ridel's band AM Radio, which will release its first album in June. The two have known each other since their teens, and Cuomo said he considers Ridel a major influence.

"Back when we were teenagers and I was practicing madly my harmonic A-minor scales on my [heavy metal] Charvel guitar, he was writing pop songs with melody and meaningful lyrics," Cuomo said. "At first I just thought he was a freak, but I gradually realized that there's something far more profound about songs than just shredding. He really turned me away from speed and toward Weezer."

While Cuomo jammed outside of the Weezer family, drummer Pat Wilson worked with his side project, Special Goodness, whose Land, Air, Sea is due March 4. Meanwhile, guitarist Brian Bell's Space Twins have just completed an album.

"I guess I should just reassure people that Weezer are still hanging out and making music together," Cuomo said. "People want to do things different all the time, which freaks some people out, but we're all pretty chill."