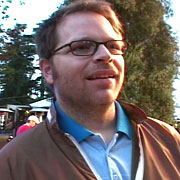 Weezer Not Exactly in Their Element At Playboy Mansion
"Beverly Hills" video's location was director's idea, not band's.
By James Montgomery
March 24, 2005


When we last left the guys in Weezer, they were busy releasing dates for their upcoming spring tour and frolicking around the Playboy Mansion in the video for "Beverly Hills," the first single from their upcoming album Make Believe (although not at the same time).

And now there's even more Weezerian info to report, starting with a behind-the-scenes peek into the making of "Beverly Hills" (see "Weezer Party At Playboy Mansion For 'Beverly Hills' Video"). A representative at Geffen Records slipped MTV News some exclusive footage of the clip, including scenes of Weez fans rocking out on the mansion's front lawn, grotto and arcade, as well as engaging in a spirited games of barefoot soccer and Twister with a bevy of Playmates. There are also about a million instances of kids throwing the "W" sign into the air like (you guessed it) they just don't care.

There's also footage of Weezer frontman Rivers Cuomo jamming out on a Steve-Miller-esque guitar solo and looking just a bit uncomfortable as Playmates cavort around him in the mansion's grotto. And he wasn't the only one who felt a bit out of place: Drummer Pat Wilson seemed a little less than psyched to be in attendance, as he explained the concept behind the clip.

"We told [director] Marcos Siega that we need a video — again," he sighed. "And he was like, 'All right, 'Beverly Hills': Let's go to the mansion, and we'll bus in a bunch of Weezer kids. And we won't tell them they're coming up here.'"

Hopefully he's a bit more jazzed about the news that the titles of three other Make Believe tracks have been revealed in a press release from Geffen. The songs are "We Are All on Drugs" (probably the second single), "This Is Such a Pity" and "Peace." But don't tattoo those titles onto your anatomy just yet. Camp Weezer offers this caveat: Several tracks on the album are still in the mixing stage, and a final track list has yet to be determined, though it is said to be very close to completion.