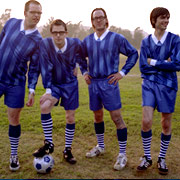 
Tenth anniversary version of Blue Album will have rarities disc.

Brace yourself, Weezer fans. While a new album is still a few months off, Weezer will inundate true believers on March 23 with a wave of demos, rarities and behind-the-scenes footage via a double-barreled dose of arcana: their first DVD and a two-disc "deluxe edition" of their self-titled debut, a.k.a. The Blue Album.

Drummer Pat Wilson said there was plenty of material to choose from for both projects, which are jam-packed with stuff that has, by and large, escaped leak to the Internet.

"We have so much stuff it's ridiculous," Wilson said. "We should just stop now and release a record a year forever. But I think we'll just continue to keep pushing forward like we've always done, and if later on we look back and see some really good stuff, we'll put it out."

The DVD, "Video Capture Device: Treasures From the Vault 1991-2002," was cut by Karl Koch, Weezer's longtime webmaster, drum tech and documentarian. Not only is it an anthology of the band's best-loved videos, but over the course of three hours it also features everything from pre-Blue Album recording sessions to footage of the band's 2002 Enlightenment Tour.

"It's a lot of bad behavior," Wilson joked. "It's really how Karl has been able to document the band as we've stumbled through our nonsense. But I think Weezer fans will look at it and think it's great because they don't have any of that stuff. I love looking at it, personally, 'cause it's really funny. When we did the voiceover track there was always something on it that made me laugh."

Hitting stores along with "Video Capture Device" will be the 10th anniversary re-release of The Blue Album. It includes a second CD full of international B-sides and demos, many of which were recorded in the band's kitchen prior to The Blue Album's release, as well as the original artwork intended for that album.

All the anthologized rarities aren't eclipsing the band's efforts to put out new material, however. Weezer are working with producer Rick Rubin on their upcoming fifth album, and they hope to have it out later this year. After more than a year apart, Wilson said, the band is as prolific as ever.

"Everyone is just getting down to business a little bit more than we have been. We're just a little bit older and we take it a little bit more seriously than we have in the past," Wilson said. "The last record was just big riffs and not a lot of focus on traditional songwriting. I think we're trying to get back into being more disciplined in the songs and making it as seamless as we can."

During the time apart, bandmembers pursued various projects, from frontman Rivers Cuomo's production of the band AM Radio (see "Weezer's Rivers Cuomo Helps AM Radio Dress For Success") to guitarist Brian Bell's playing with the band the Space Twins to Wilson's own efforts with Adam "Atom" Willard of the Offspring in the Special Goodness. Wilson said the separation only brought the band closer together.

"We had toured for basically two and a half years," he said. "It was nonstop and I think we just needed a little bit of a break so as to say, 'Let's go away for a while so people don't get sick of us.' We thought, 'We'll come back when it feels right,' and I think that's where we are right now."

Wilson, who said the band chose to record with Rubin because of his work with the Red Hot Chili Peppers, also said that having a producer in the studio took a lot of strain off of them and helped everyone crank out better work.

"It really makes a big difference 'cause you don't really have to think about it, you just go in and let out your thing," he said. "You let somebody else evaluate if you're any good, and I think we needed that desperately. Now we write and rewrite and take it as far as we can go. We're constantly trying to make everything we've been doing better."