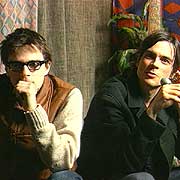 Weezer's Rivers Cuomo and
Brian Bell
Photo: Interscope
After waiting five years for Weezer's latest album, which was finally released on Tuesday, the band's loyal fans have learned to be patient.

What was once a Weezer drought, though, is now turning into a flood. Even as "Hash Pipe," the first single from Weezer (a.k.a. The Green Album), climbs the charts, the band is already working on a "crazy" batch of new songs penned by frontman Rivers Cuomo.

"We have so many really brand new, really amazing songs that we can't wait to record," bassist Mikey Welsh said Tuesday. "Rivers is just really pouring out amazing songs and we're working on a lot of songs all the time." The newest set of songs — which have come together only in the last few weeks — follows in the shambling footsteps of 1996's quirky, hard-rocking Pinkerton, avoiding the slick, concise power pop of the band's newest album, Welsh said. Though Pinkerton fell far short of the commercial success of Weezer's (also self-titled) 1994 debut — which spawned the hit "Buddy Holly" — the album is a favorite among hardcore fans. With its polished production, ultra-concise arrangements and relatively impersonal lyrics, The Green Album is more in the vein of the band's debut.

"It's pointless to compare this [new] record to Pinkerton," said Welsh, who joined the band after the recording of Pinkerton as a replacement for original bassist Matt Sharp. "It's a different kind of record — it's a gleaming pop record. We have a lot of really amazing new songs that go way past the quirkiness of Pinkerton, [but] this is the kind of record we wanted to make right now. This is the kind of record we wanted to come back with." Former Cars leader Ric Ocasek, who produced both the band's debut and The Green Album, said that Cuomo was writing new songs up until the last minute of the new album's recording sessions — despite having a backlog of more than 60 compositions from the band's hiatus. "I'm sure if he could, [Cuomo] would probably be in the studio making another [album], like, tomorrow, because that's what he likes to do," Ocasek said.

Weezer recorded at least six extra songs in addition to The Green Album's 10 tracks during the sessions, according to Ocasek.

The band previewed some unrecorded songs last year on the Warped Tour and on this year's Yahoo!-sponsored outing, but fans shouldn't expect to hear Weezer's newest songs in the band's shows.

"We don't want them on Napster," Welsh said. "We're trying to keep them to ourselves until we're ready to record them." Weezer are in the midst of an informal promotional tour of concerts and signing sessions at bowling alleys, roller rinks and other unlikely venues. Tickets for shows on what's been dubbed the "Hooptie Tour" are generally being given out by local radio stations. The band is planning a more extensive amphitheater tour this summer — probably as an opening act — but has not yet announced any details.

Fans can also catch the band on the tube — they play "Saturday Night Live" on Saturday and "Late Night With Conan O'Brien" on June 5. Weezer Hooptie Tour dates, according to the band's management and label: